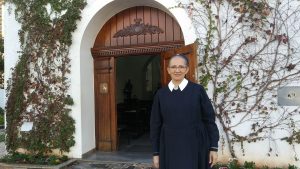 Sr. M. Luciana de Almeida has been coordinating the extra-curricular religious education for more than 30 years.  Her missionary heart goes beyond the classrooms. She went to the children playing on the street and invited them to get to know Jesus. This led to the social projects. “I saw the children on the street and the people who were angry because of their stealing. So I asked for help and designed a social project to keep the children busy while they were not in school. Little by little they also stopped stealing.”

Sister M. Luciana is very close to the needy as the person in charge of the catechesis at the Cathedral of Londrina/Paraná and in charge of a center for the education of children. “Often the children come without any religious experience, but gradually they grow in religious life, receive the sacrament of the Eucharist and let themselves be confirmed. This is a joy that is priceless.” She also tells us: “In the past year we have organized with the children a “baby tea” for the Christ Child that is customary here and collected many things such as clothes, toys, pampers … to help needy mothers”.

A missionary in prison

For many years, Sister M. Luciana evangelized with the Pilgrim Mother in the prison of Atibaia/São Paulo. She gained the trust of the prisoners and devoted a lot of time to listening, counseling and helping them with their needs: “On Saturdays I spent the whole day taking care of the prisoners. Weddings, baptisms, first communions and confirmations took place. I also visited their families and helped them with their needs. I often took the children with me to visit their parents in prison,” says Sister M. Luciana.

She taught the prisoners how important it is for them to engage in manual labor and offer their sacrifices to God. She tells: “Once, during Lent, they themselves took the initiative for everyone to donate part of the food they received at lunch to the needy in the community. In Advent, they collected the sweets they received from their relatives and asked me to give them to the needy children.”

God does not abandon His children

Sister M. Luciana remembers that she was often able to experience the work of Divine Providence, because even without having anything, she could always help all those who asked for something. She tells:

“I was in the process of giving out baskets of food when supplies ran out and food was still missing for about 15 families. Before I came to say anything, a truck surprisingly drove up with a donation of “basic food” and I was able to help everyone.

Once, on Christmas Eve, I received 50.00 R$ and went to the supermarket to buy necessary things for a Christmas dinner for the family of someone who had just been released from prison. I took many products that would certainly cost more than I had money. As we went through the checkout with the goods, they cost exactly 50.00 R$. My companion was completely surprised and thought she had done something wrong because there were really a lot of goods. She had the manager come and insisted on checking the entire purchase again. The result was the same. When I explained that the goods were to be used as donations, everyone was speechless. God does not abandon His children”.

Mary’s presence in the world

“Our greatest task must be to radiate Mary’s presence in the midst of the world,” says Sister Luciana. She had decided to become a Sister of Mary with the desire to work in mission areas.  She fulfills her mission with the children, in catechesis and in kindergarten, in a task that unites social work and spirituality. For her it is more than a gesture of charity to turn to the needy, it is a mission that fills her with joy, because “to see people grow inwardly and improve their living conditions, there is no price for that,” concludes the sister.

To be Mary always and everywhere

Sister M. Luciana tells us that during her visits she always wears her sister’s dress, be it in prison, in the slums or elsewhere. She says: “I was in places with the worst and most degrading conditions imaginable, but I was never attacked. Many times I entered slums where there are armed traffickers. When I told them I was going to visit a prisoner’s family, they let me through! All this thanks to our sister’s dress, because it is a testimony and radiates an atmosphere.”