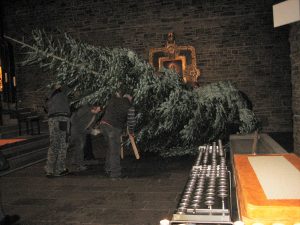 When Building the Crib, Looking over the Shoulder

From the Advent Diary of the Adoration Church on Mount Schoenstatt

Every Christmas season, many visitors come to the crib in the Adoration Church on Mount Schoenstatt – whether for the “10 minutes at the crib” or for silent prayer in a quieter time of the day. From the Christmas Mass on Christmas Eve until the end of January, the crib glows, decorated with many details. Above it shines the glory of the Christmas trees. Everyone can imagine that many hands prepare this work of art for many hours and days with love and patience.

Sister M. Theresiana Berger experiences this season for the first time in close proximity, and lets us have a look at the Advent diary of the Adoration Church.

Today, the Christmas trees for the Church are being cut – all of them come from our own grounds on Mount Schoenstatt, two directly from the neighboring Novitiate garden.

Thick fog lies on Mount Schoenstatt, but the caretaker and the men of the garden team are in action early. After some pews have been moved to the side, the transport of the first tree to the church begins.

It is 9:15 a.m. when the first tree is standing. It has its place to the right of the picture of the Blessed Mother.

Even bigger are the three trees in front of which the crib will stand later. The weight is corresponding, and with the help of ropes they are set up and secured.

Especially when you watch for the first time, there are moments when you send a prayer to heaven. First the middle tree, then the left one, finally the right one – everything goes well, my “Thank God” comes from the heart! Now the trees stand firmly in their place.

Now the last working steps for today are as follows: the installation of the spotlight for the crib and the tree lighting. A test: The lights are on. Now the Advent wreath is moved to the right place, then the diligent helpers say goodbye.

During the next days there is a break, or better: a holiday. We celebrate the Feast of the Immaculate Conception of Mary with a solemn service in the Adoration Church and the 2nd Sunday of Advent. – But then it really starts with the construction of the crib!

Today—here we go! We start with the actual construction of the crib. The substructure is created professionally according to a technical drawing. I learn that four inconspicuous nails play an important role as initial marking, because they give the whole building the right alignment.

This scaffolding is, so to speak, the foundation for everything; it supports the entire crib landscape.

One of the unseen and yet fundamental tasks is to get the individual parts out of the cellar on large transport carts. They all have a number – each part is needed and has its place, none should be missing. Involuntarily I think of us sisters, of the Church, of the world, of all people: Everyone is an original that cannot be replaced and has a certain place with a concrete task.

Once the core of the substructure is finished, we cover it.

Now the side parts are put on and also covered.

This part already suggests that the well will be placed here later.

Then comes the most difficult part because it has different heights.

In the meantime, we’ll cover the roofs with moss and do some repairs.

Tomorrow we will continue!