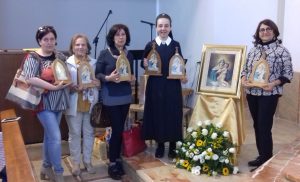 Sister M. Ivone Zenovello from Brazil lives in Rome and works for the “Pilgrim Shrine Project”. On her travels throughout Italy, she witnesses how people experience the closeness and help of Mary through the Pilgrim Shrines.

Mary works: in the families

A young family in Sicily told me how the Pilgrim Mother came to them at just the right time:

After the death of their grandfather, the mother fell ill with depression, and Vittoria, a five-year-old girl, clearly suffered from this situation. The family hoped to get better by moving. The new landlord is responsible for a Pilgrim Shrine Circle and offered the Pilgrim Shrine to the family. The mother Mariana hesitated because she had not been in a church for a long time, but she agreed because the loving gaze of Mary spoke to her. One night she dreamed of her father repeating the words: “You lose a lot of time!” When the neighbor brought them the Pilgrim Shrine and saw Vittoria, she said the same words. Mariana listened to the neighbor’s advice and immediately took the child to the children’s hospital. A brain tumor was diagnosed and the doctor said that an hour later it was too late for an operation.

I was in the Shrine when I heard about it, and it was overwhelming how many families also prayed for Vittoria. The operation went unusually well. The doctor then said thoughtfully: “If you believe – I don’t know how to define it – but for me it’s a miracle”. Only three days later Vittoria was released from hospital and is now completely healed.

Mariana then gave the following testimony: “I discover a sign of God behind everything. The Blessed Mother came to our house to help me interpret my father’s voice in a dream. It is no coincidence that my daughter is called Vittoria: Jesus conquered death! We can repeat the words of the doctor: ‘If you believe!’ I believe! Vittoria was born again and so was my family.”

A widowed woman, almost 80 years old, has been visited by the Pilgrim Shrine from the 20th to the 22nd of each month for about ten years. During the first years, the day before, she bought flowers to decorate the picture of the Blessed Mother. The florists already knew her and were used to her. Meanwhile the woman cannot walk anymore, but the staff of the flower shop surprises her with fresh flowers on every 19th! 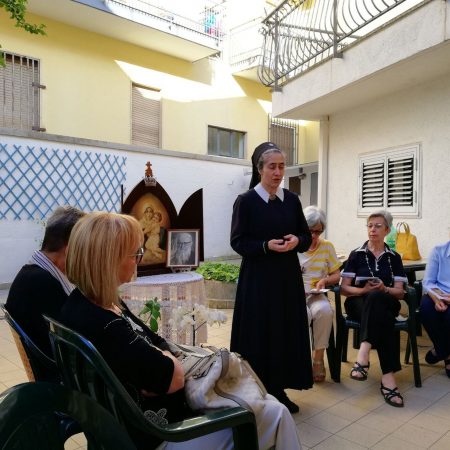 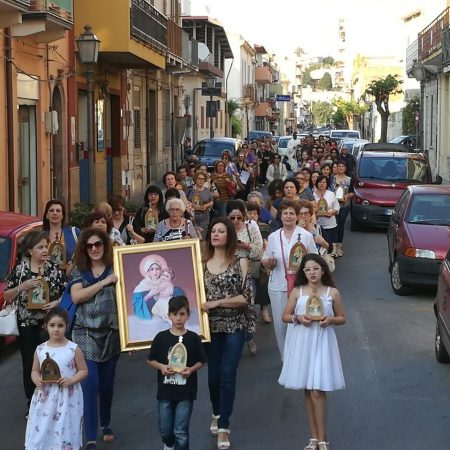 Mary works: in the parishes

In 2009, in a parish in Sicily, I met a person who wanted to enthusiastically found a Pilgrim Shrine Circle. She encountered great difficulties. At first, many did not even notice the picture of the Blessed Mother. But slowly more and more people became interested. The prayer and commitment were worth it: today there are 107 pilgrim shrines in this diocese. A priest who was very skeptical at the beginning organized an audience with the new bishop so that we could present the Schoenstatt Movement and the Pilgrim Shrine project to him. He welcomed us with open arms and was very interested. –

In many parishes in Italy there are priests of other nationalities. I am struck by the joy they feel when they find the Pilgrim Shrine in their families in the new and still foreign culture. A Peruvian Franciscan reported:

“The transfer to Italy was not easy for me. It was a comfort and a sign of hope that my new parish is consecrated to the Annunciation. During the first contacts with the groups and movements in the parish, I also discovered Schoenstatt because a large number of families receive the Pilgrim Shrine and they meet on the 18th of each month for formation and to celebrate Holy Mass. Since I had already learned a little about Schoenstatt’s spirituality in Peru, I saw in it a sign of God and the presence of the Blessed Mother that awaited me in this parish, so to speak. I put everything under her protection and I know that she will help me”.

After a few months, this priest visited the two Schoenstatt Shrines in Rome. He was able to celebrate Holy Mass there and said: “Without her (the Blessed Mother) I would not be able to overcome the many difficulties I face. I came here to give thanks, and I will do everything I can so that the Bishop and many priests will experience the good that the Pilgrim Shrine project wants to bring to families and the Church”.

Working with the Pilgrim Shrine project gives me a lot of joy! This requires a lot of work and I often travel for long weeks, but it is worthwhile to see the miracles that Mary works in the families.