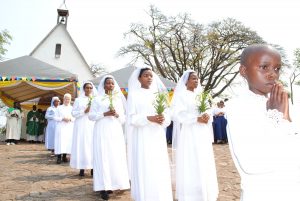 for five Schoenstatt Sisters of Mary

Five novices received the dress of the Schoenstatt Sisters of Mary:

Already on Saturday their parents arrived. In the evening they could watch a video about the vocation and activities of their children.

On Sunday, in silence and prayer, they and many other faithful awaited the novices in front of the Shrine of Confidence.

In a time of grace

The Archbishop of Bujumbura and 14 priests, including five Schoenstatt Fathers, collected the novices from the Shrine. We went in procession to the parish church. Five Marian Apostles accompanied the novices. At the beginning of Holy Mass, the parish priest welcomed the Archbishop and pointed out that these five novices would be received during the time of grace of some Jubilees: 50 years of coronation in the Shrine of Confidence, 25 years of the Schoenstatt Shrine in Mont Sion, Gikungu, and 75 years of the parish of Mutumba.

Service to all people

In the homily, the Archbishop responded to the readings of the day. He stressed humility and love: “Every Christian, especially those who consecrate themselves to God, are called to humility so that our message may bear fruit. To consecrate oneself to God means to commit oneself in selfless love for one’s fellow human beings. Truly consecrated people are characterized by service to all people, especially those in need.” 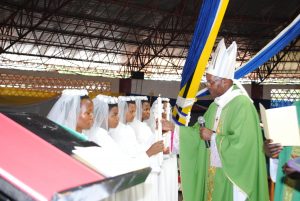 The sermon was followed by the reception rite. It was nice that the Archbishop addressed each novice with her name when he presented the dress. During the preparation of the offerings, the novices brought the offerings to the altar in baskets. At the end of Holy Mass, a novice in the name of all thanked God and Mary as the Mother Thrice Admirable of Schoenstatt and all those who in some way contributed to this day of grace. After the final song we went to the Shrine of Confidence, where the novices consecrated themselves to the Blessed Mother. 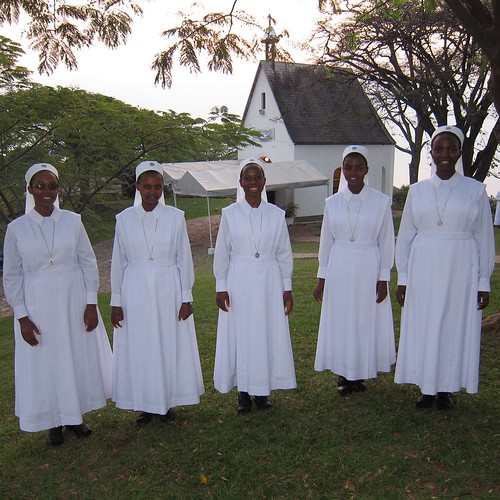 At lunch, our candidates contributed to the festive joy with dances. Five people gave a speech. They all congratulated the novices and wished them all the best for the future. The Archbishop was pleased to be able to participate for the first time in a reception.

It was a blessed feast day and the Blessed Mother showed that she really is the Queen of Confidence. The preparation and the realization were done in good cooperation. Two days before the reception, God gave us a little rain and the weather was pleasant. On the day after the reception it was pouring, which increased our gratitude for the good weather on the feast day. With the Mother Thrice Admirable we praise God and say:

“The Lord has done great things for us and His name is holy.”