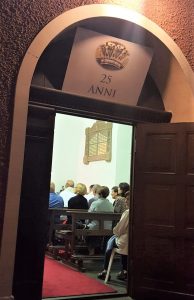 Covenant Mass of the Roman Schoenstatt Movement at the Cor Ecclesiae Shrine in Rome on September 18, 2019

“When a festival ends with rain, it brings luck!”

In 53 cars, the visitors of the Covenant Mass arrived at the archway of the Roman aqueduct on Via Aurelia Antica 112 at 9.45 pm.

With joy and expectation, the seven Sisters of Mary in Rome and those who had come from Schoenstatt looked forward to the Jubilee celebration. The Roman Schoenstatt Family had invited to the common renewal of the Covenant of Love all those who gather at the Cor ecclesiae Shrine on the 18th of the month and for the first time those who meet at the Matri Ecclesiae Shrine in Belmonte on the outskirts of Rome on Via di Santa Gemma. Above the door of the Shrine there was a sign with the occasion of the feast: A photo of the crown and below “25 anni”.

25 years have passed since the MTA received the crown here as Regina Cor Ecclesiae. Almost 700 Sisters of Mary from all over the world had made the pilgrimage to Rome on September 15, 1994. The coronation was a request to Mary that the Schoenstatt Movement would be able to fulfill its mission for the Church of the future and that the founder, Father Joseph Kentenich, would be recognized as a saint for the new time of the Church and that his message of the Covenant of Love with Mary would be known everywhere. Mary should help to renew the individual and human society. 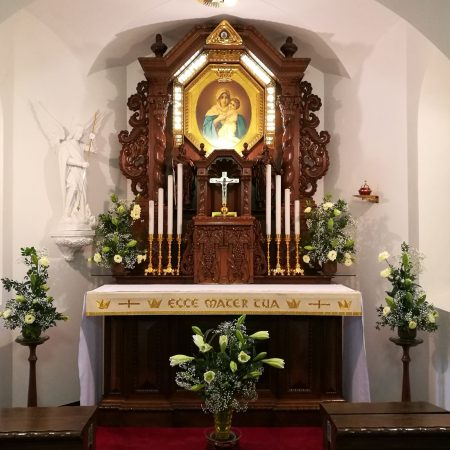 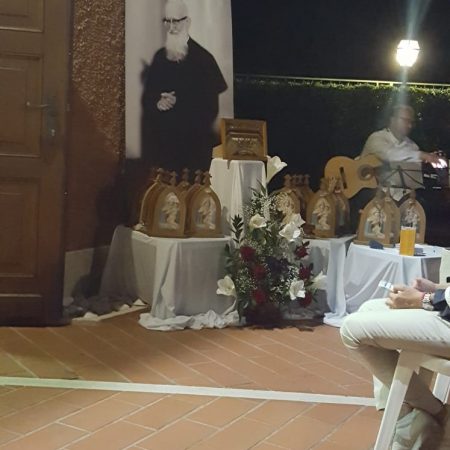 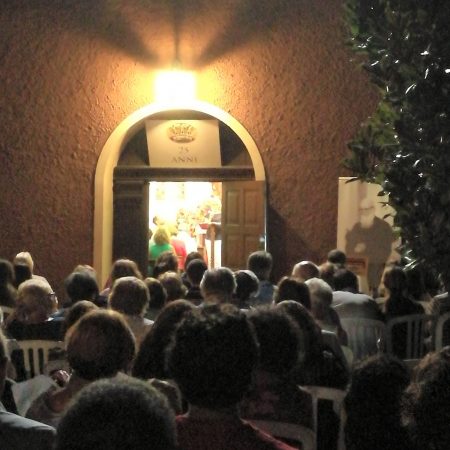 A representative of the Schoenstatt Family welcomed everyone. Then followed the entry of the flags and the Pilgrim MTAs. The music group and choir accompanied the songs of the Covenant Mass. Father Facundo Bernabei, the leader of the Schoenstatt Movement in Italy, explained the meaning of the coronation in his homily. In 1939, Mary was crowned for the first time in the Shrine in Schoenstatt. She was to glorify herself in the difficult time of the World War. At that time, the Sisters of Mary surrounded the Shrine as a protective wall. They wanted to be the living crown of Mary through an authentic life. Crowning means breathing out one’s own weakness and neediness and breathing in the strength that Mary intercedes for us. With new courage, life can go on.

The burning of the papers in the jug after the renewal of the Covenant lasted longer this time because the jars of both shrines were filled with many contributions. 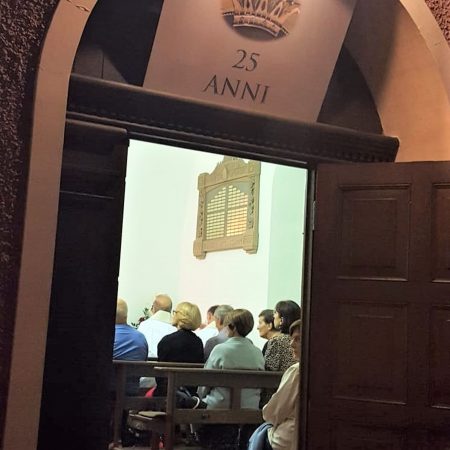 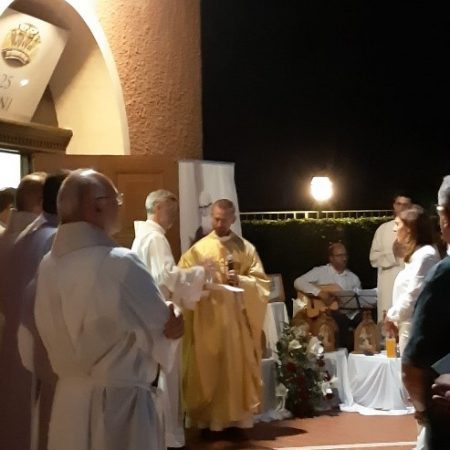 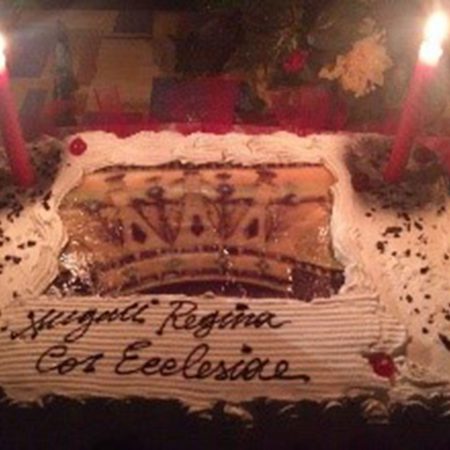 The technical man, who had still tried in vain to eliminate the noise in the new loudspeaker system, simply stayed there. “It’s so beautiful here! What does burning the papers mean?” He will come back and at the next celebration everything will work well.

A happy feast followed. While cutting the cake everyone sang a spontaneous congratulation for the Regina Cor Ecclesiae. As soon as the delicious cake had been eaten, the first raindrops came and after a few minutes everyone flocked to their cars. “When something important is celebrated, it rains,” said the engineer who accompanied the construction of the Shrine in 1990. The sisters received many happy echoes. Also the two women who had helped prepare the Rinfresco, the snack bar, drove away happily on their mopeds.