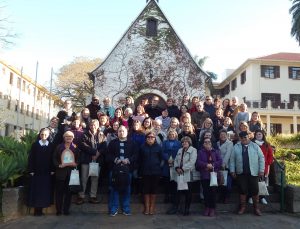 For the third time we have offered a retreat for a wide audience in our Movement House near the Tabor Shrine. When the participants registered, they were integrated into a WhatsApp group and received suggestions and thoughts for the spiritual preparation of this day. The theme was

The retreat took place on August 4, a Sunday, at the Centro Mariano in Santa Maria, Brazil. 60 participants took advantage of this opportunity. For those who already came on Saturday, a “Tabor hour” was prepared the evening before. United with the Savior on Tabor like the Apostles, many could open their hearts for the silence of the next day. 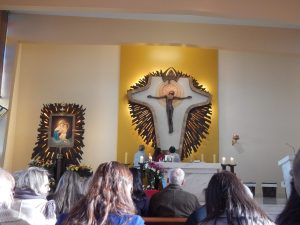 When a missionary leaves for the mission, he must carry something in his luggage that can help him along the way. Therefore, at the beginning of the silent day, each participant received a bag in which he could keep everything he received during the day. First of all, he was invited to prayer and silence, which is very important for a missionary. Although silence is necessary, it also costs us something, because the transmission and sounds of the world make us talk all the time. The silence allows us to feel the joy of being with God. Then we can talk like Moses in the “tent” with the Savior and like the apostles on Mount Tabor who say: “Master, It is good for to be here! We could experience the closeness of the Lord above all in the Shrine, but also in the rooms of the house and in the chapel before the Blessed Sacrament. After each prayer time or common reflection, the participants received written suggestions for personal reflection, which contributed positively to the atmosphere of prayer and inner reflection. A meditation that inspired us to give the Savior the cross that we encounter daily prepared the participants for the sacrament of Reconciliation, one of the highlights of the day.

The living testimonies of those who are sent in the Covenant of Love with the Blessed Mother in the Shrine also contributed to the theme of the retreat. They set out to visit families, sick people in homes for the elderly, at home and in hospitals. In this context, a custom of Mr. João Luiz Pozzobon, who began the Campaign of the Pilgrim Shrine, was also remembered. On one day of the year, he used to visit all 30 tabernacles that existed in the city of Santa Maria and to lay a red rose in front of the tabernacles everywhere and present a white rose to the Blessed Mother. For him it was a concrete sign of unity between Jesus and Mary. On this pilgrimage day, he offered the sacrifice of eating only dry bread and drinking only water. To follow Mr. Pozzobon’s example, the participants of the retreat visited four tabernacles and laid the roses. They prayed in the intentions of the Church and in the personal intentions they carried in their hearts. One of the participants testified: “Like João Pozzobon, we want to go through Mary to the Savior, to carry Jesus and Mary in our hearts and then bring them to the people”. 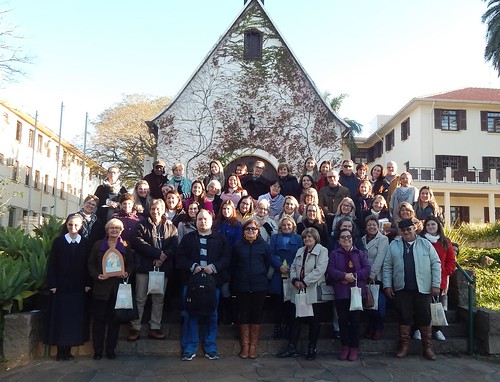 So slowly the “bag of prayer and mission” was filled with memories and suggestions of the retreat day. This treasure, which each participant conquered in silence, became more and more precious. But now came the great shock: At the end of the Eucharistic celebration, everyone was invited to give their treasure as a sign of the resolution that is characteristic of a true missionary. This request cost many sacrifices for the individuals. But how great was the joy of all when the priest blessed the bags with the treasures of the day and each of them received his own again with the task of giving away all that was inside. “It was a great sorrow to give them up, but then I understood that it is necessary to give oneself completely and I have already joyfully given a rosary,” a woman testified. 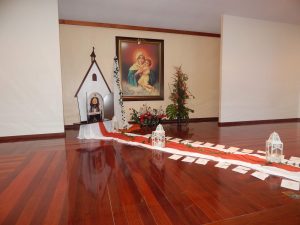 Another participant concluded the retreat with the words: “Thank you for the opportunity to live the day of the Lord so deeply with Him and our dear Mother! Thank you for the decorated rooms, the welcome, the dynamism, the prayer exchange, for the enrichment through the presentations, for the testimony, for music and food. It was a day when we felt completely surrounded by the love of the Blessed Mother. … How comfortable one feels here! … We have truly experienced a very special day!”

In the same way, we can also speak of the joy among the sisters who made this day possible. It is a joy to share some of the spiritual wealth of our father and founder with others, and to be able to count on the help of so many covenant of love workers who support us as volunteers in the Movement House. We are one family. We are our father’s family!