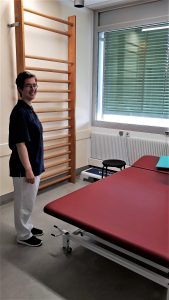 “My name is Sister Petra-Maria. I’m a physiotherapist.”
It is not uncommon for the first encounter with a new patient to begin in this or a similar way.

For four years I have been working as a physiotherapist in a clinic in Koblenz, not far from Vallendar, Schoenstatt.

And your work colleagues?

“Do people know that you are a sister?” an acquaintance asked me when we talked about my work. – Yes, my colleagues at work know that. They also speak to me with my sister’s name. It’s also on my employee ID card. But since I’m not in a sister’s dress, but in the prescribed uniform, or in civilian clothes, not everyone I deal with knows that. Some patients ask questions, for example with the sentence: “Are you a nun?” And then I am happy to answer: “I am a Schoenstatt Sister of Mary. Do you know Schoenstatt?” Not infrequently there are interesting conversations about Schoenstatt, the Church, and the faith.

One patient once told me in amazement that she didn’t know that there are sisters who wear civilian clothes and go to work instead of spending the whole day behind the walls of a convent. I said that the religious communities that live like this have their justification. They had and still have a great task. But our founder, Father Joseph Kentenich, wanted to found a new kind of community with us. We should be in the middle of the “world”, that is, we should be with the people, but we should take them with us to God. – Then the patient says: “That’s great!” – My enthusiastic answer: “I think it’s brilliant too!”

One day a colleague approached me. She had some questions for me that she wanted to clarify. So we met one evening for a walk along the Rhine. It was a beautiful summer evening and we had a very interesting conversation in which we both learned more about each other. For her, who grew up without religion, I am an ‘exotic being’ as a Schoenstatt Sister of Mary. Praying regularly, living a virginal lifestyle, living in a community, discovering God behind all events – these and many other phenomena are completely foreign to her. She also told me about disappointing experiences she had with the Church in various ways. And I can empathize with what it is like for her. – We both continue to be very different, but we respect each other and can work well together for the good of our patients.

“The human dignity of the patients is at the forefront, that has to be in the team rules for me!” 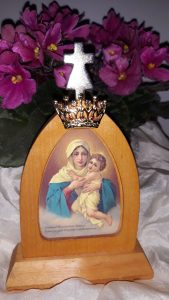 In our hospital there is an acute geriatrics section for some time now. There we work for and with the elderly in a multi-professional team of doctors, nurses, social workers, therapists and so on. Whoever knows the current situation in the hospitals in Germany is not surprised that with all the progress and also with all the commitment not everything always runs smoothly. And one day the tensions in our team, which is still quite new in composition, became so numerous that something had to happen–urgently. Under the leadership of the nursing service management, we began to develop team rules that were to be binding for everyone. In one of the joint meetings, points were collected for this purpose. Everyone should write on a piece of paper and then present what is particularly important to them. I wrote: “The human dignity of the patients is in the foreground”. This was confirmed by all and came with a small change right at the top about the team rules, which also contain many other valuable things.

Realizable in the Covenant of Love

For me personally, the concept of “human dignity” is very significant because every person, no matter how young or old, how healthy or sick, has an imperishable dignity since each is loved by God. And this dignity must be protected – also in Central Europe in modern health care – and such an attitude can shape the whole working day. I receive the strength to commit myself again and again in the Covenant of Love with the Blessed Mother, the Mother Thrice Admirable, Queen and Victress of Schoenstatt.