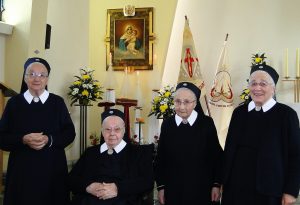 The joy of being a Sister of Mary

A fire burns in the heart of every person who is called to leave everything out of love for Christ and for service to or in the Church. This burning enthusiasm gives the strength to overcome all difficulties with confidence and to give one’s life entirely to God.

The most beautiful thing is that this fire does not go out over the years. It purifies and removes everything that does not yet entirely belong to God and ignites man more and more for his mission.

Witnesses of this fire

We were able to witness such a fire on June 18, 2019 in Atibaia/SP at the celebration of a diamond jubilee: Sister M. Francisca Buzzacaro, Sister M. Inatis Schwerdtfeger, Sister M. Reginita Schubert and Sister M. Lucinda Schüpper belong to the Institute of the Schoenstatt Sisters of Mary.

Even if the body becomes more fragile, the shining eyes of these sisters show that the fire of their love is becoming more and more ardent:

“It is the great joy and the tremendous feeling of gratitude
to God and the Blessed Mother”,

says Sister M. Lucinda. Sister M. Reginita and Sister M. Inatis left their German homeland in 1958, just one year after joining the community, to serve the Schoenstatt mission in Brazil. The fire of love helped them to overcome all difficulties.

In the Holy Mass, where they renewed their total dedication to God in the service of the Schoenstatt Work, Father Francisco Lemes recalled in his homily the difficult years in which they began their journey, when the Founder, Father Joseph Kentenich, was in exile imposed by the Church. He thanked each of them for their trust and their fidelity to Schoenstatt’s mission. “Every vocation is an hour of proclamation and these women, like Mary, said their yes and remained faithful.”

Difficulties become the victory of love

“It was a very dark and difficult time. Our reception was in March 1957, and in 1958, in the same month, we began our travels to Brazil,” recalls Sr. M. Reginita.

“We did not know the founder, because when we became acquainted with Schoenstatt, he was already in exile. But when we arrived here in Brazil, we met him in the person of Sister M. Emanuele, then Provincial Superior and later General Superior. The last news we received in Germany before our departure was that seven seminarians were dismissed from a seminary because they belonged to Schoenstatt. These trials were food for love; they became a blessing and strengthened our vocation”.

The joy that these sisters radiate in everyday life is the clear proof that they have preserved the loving hearts of that time and the unshakable trust: God’s works will always be victorious.

The gaze of Sr. M. Reginita reveals the joy and gratitude for the 61 years she has been able to live in Brazil: “I lived my whole life as a Sister of Mary here in Brazil; here we gave our life to the Schoenstatt Work”.

A yes that includes the past, the present and the future

This is an important impulse for the young people who are just beginning. Sister M. Aluane Cristina Simões, who was admitted to the Institute a year ago, said with emotion: “What touches me is the fidelity to the Schoenstatt vocation and charism, the love for Schoenstatt, for our Father and Founder and for the Sisters’ Family! It is my desire and my longing that in 59 years I will be able to celebrate my Jubilee with such love and vitality as they do. I know that the beginning of the Sisters’ Family here in Brazil was not easy. Everything still had to be conquered. That is why I can only thank them for the good example of their love for Schoenstatt and for the Family.”

For Sister M. Francisca, too, the celebration is a day of love and joy: “For me, the celebration of the Jubilee is a great joy and a double yes: a yes to the long journey that we as Sisters of Mary have been able to make to this day, and a yes for everything that the future will bring, a yes for eternity.”