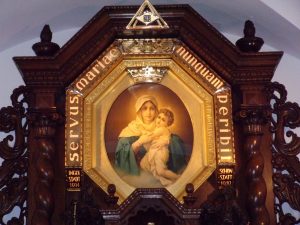 A child of Mary never perishes!

“Under his skilful hands a wooden light frame was formed, which he placed around the image of the Mother Thrice Admirable in the shrine.” … (Chronicle)

In 1919, i.e. 100 years ago, Fritz Esser, with great joy in every free minute, made the first light frame around the picture of the MTA in the shrine.

We would probably not have paid much attention to this little “Schoenstatt Jubilee” if the Blessed Mother had not made us aware of it herself. On January 24, 2019, the first day of the novena for the Feast of Candlemas, two sisters were in the shrine here in Friedrichroda early in the morning. Suddenly, in the midst of their silent prayer, a noise that was not good came to their ears from the altar. The light frame around the picture of the MTA had come loose; it buckled and landed on the altar table in two large and some small parts. The light around the MTA image continued to burn, only

the frame with the writing had fallen off!

Not even a candle had fallen. It had knocked the sword out of the holy apostle Paul’s hand, it was still in the pedestal. A flower bowl had also been hit, but it was able to bear the hit.

Of course, the frame had been in need of renewal for some time, but the experts didn’t really want to go there. What now? One was the purely technical question: Who will restore it and what will it cost? At the filiation of our old sisters who are in need of care, everyone quickly agreed: We would also make a financial contribution! But the sisters also asked themselves: What does Divine Providence want to tell us? Why did the frame come down right now? Does Our Lady want us to do more for her? Each of the three filiations here in Friedrichroda in its own way?

In a ceremony on February 2, the sisters took up the event and prayed:

“Dear Blessed Mother, that the light frame around your picture in our Shrine, which was in need of renewal, fell down on the first day of the novena for today’s celebration, we want to see as a sign and a call to make you shine even more, especially through our being. Let the fire of love for you burn in our hearts, just as it burned in the heart of our Father and Founder, who never tired of proclaiming you and your position in the plan of salvation”.

The sisters started a prayer campaign. Above all, they took the request with them into their daily rosary. St. Joseph was also hired by some, especially as a competent helper in the restoration of the broken frame. And he worked brilliantly: After it seemed to be very complicated and expensive with experts, our two caretakers went to work courageously and with much love. 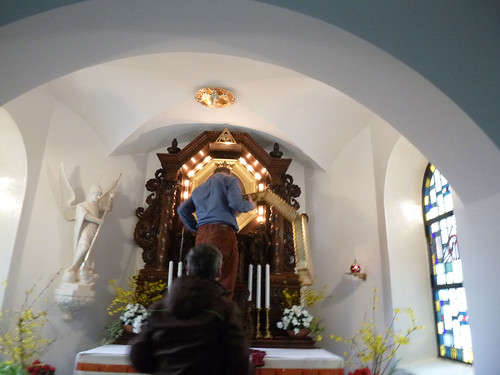 They created a completely new wooden frame. The metal and glass parts were reused, but first thoroughly cleaned and carefully straightened. On February 11, 2019, they were able to reattach the renewed frame, securely fastened and well lit. The money that the Sisters had already donated for this purpose was now given to the Original Shrine.

The date impressed us again. February 11th is the day of remembrance of our Lady of Lourdes, a Marian feast!

The sisters also enjoyed the historical research about the frame in the Original Shrine and in the Shrine in Friedrichroda, which is a faithful copy of the Original Shrine. It was consecrated on October 28, 1954, in the Marian Year. Many people in the East German diaspora were very involved in the construction and interior decoration of the Shrine: through prayers and guard hours, but also by bringing stones with them, donating furnishings and making a financial contribution. Despite much resistance, the shrine could be erected. It has become the spiritual center and the center of the Schoenstatt Movement in the former GDR (East Germany) – and beyond to this day.

Let us receive Mary as light in our lives!

On February 16, 2019, the monthly pilgrimage day, Father Eberhard Jacob, Schoenstatt priest, responded to the event with the light frame: “Mary carries Christ, the light in her womb, she brings the light of Christ to Elizabeth and the people, she gave birth to Christ, the light … Let us receive Mary as the second light in our lives, so that she may shine through us.

The light frame has a message and it is good when something ‘happens’ so that we become aware of it anew”.