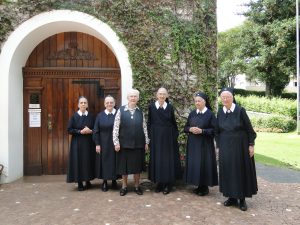 Fifty Years of Total Devotion to God in the Schoenstatt Work

“Being a Sister of Mary for more than half a century means having found the full meaning of life,” says Sister Fernanda Balan. On March 19, 2019, together with six other jubilarians, she will celebrate five decades of her eternal consecration in the Secular Institute of the Schoenstatt Sisters of Mary. “To be able to celebrate an anniversary means, with all one’s heart, above all to thank God, who chose us and gave us the grace of fidelity. In the mystery of love and of the Cross, he united our lives with Jesus to help him as a little Mary in the great work of salvation,” affirms Sister Iracema Müller.

The Golden Jubilee is a good opportunity to look back with gratitude on the past years and to discover the fidelity of God who chose and led us. In this atmosphere, Sister M. Fernanda tells us about her experiences: “Since the first steps in the Institute, I have discovered how beautiful life can be when people give themselves completely and feel accepted and loved. I learned to appreciate the ideal and the mission of becoming a little Mary”.  And she adds: “I am a rather original type, but I can say that I have always felt welcome, respected and appreciated in the community”.

The death of the Founder, Father Joseph Kentenich, six months before the celebration of her final incorporation, was an event that had a great impact on the history of the course: “We waited with great longing for Father Kentenich’s visit. We dreamed that he would personally receive our eternal consecration, but God’s plans were different. We felt ourselves involved in the inbreak of the Divine, which the Schoenstatt Family experienced through his homecoming, and we were able to experience the person of our Father and Founder in his new way of being from eternity”.

Since their entry into the postulancy in 1960, the seven Sisters have walked their way together. For more than half a century, they have been fully committed to God and the Schoenstatt Work. During these years, they were able to contribute to the history of Schoenstatt in Brazil and Portugal. Let us learn a little about the Jubilee Sisters: 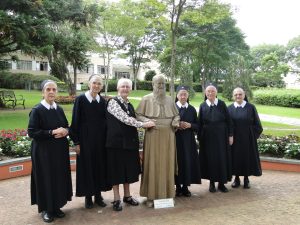 Born in Santa Maria/RS, she met Father Joseph Kentenich, the founder of the Schoenstatt Work, at the age of nine. During his visits to Brazil, she was able to meet him several times. For 35 years, Sr. M. Raquel worked with the groups of the Schoenstatt Movement. For the last 14 years she has been working in the Secretariat for the Canonization of Father Kentenich and Sister Emilie Engel, giving lectures and helping to spread the novenas and brochures so that the people may have their intentions heard through the intercession of Father Joseph Kentenich.

As a young sister, she was given the task of bringing Schoenstatt to Portugal, where she helped to build the Shrine and the Schoenstatt Center in Aveiro. She then worked for almost a decade as a Movement Sister for the Portuguese speaking Schoenstatt Movement in Africa, in Cape Town and Johannesburg. After her return to Brazil, she belonged to the provincial leadership and today she helps with the pastoral work at the Tabor Shrine.

In addition to these answers, she tells us a little about each of her course sisters:

She came to Brazil as a missionary. For many years she worked as a nurse in “Santa Casa” in Londrina and in Ribeirão Claro. With the help of her German relatives and benefactors, she helped to build the crèche “Sonnenstrahlen”, a daycare center where she does holistic social work. She is known among the children as the “sister with chocolate”, because in addition to food donations, she always has chocolate and sweets ready to give away.

She is also a German missionary. For a long time she was responsible for the mother-child ward of our hospital “Santa Casa” in Londrina.  For many years she belonged to the adoration community and supported the external prayer community, especially during the annual meetings, by publishing books, articles and prayer aids.  For many years she also belonged to the provincial leadership in Santa Maria.

She worked in various administrative positions at the Santa Casa Hospital in Londrina.  For several years she accompanied the work of João Luiz Pozzobon. She was the first sister to systematically organize the Rosary Campaign at the diocesan level.

She always carried out practical work as a tailor and in the kitchen and is still, at the age of over 85, a qualified contact person for the production of our sister’s dress.

She was a student at the grammar school “Mãe de Deus” in Londrina and belonged to the Schoenstatt Youth. As a Sister of Mary, she first worked in catechesis and in the apostolic field. As a Movement Sister in São Paulo, she closely followed the founding of the second Brazilian Province in Atibaia from 1972 on and belonged to the provincial leadership for many years. After graduating from the John Paul II Institute in Rome with a Master’s degree in Marriage and Family Research and returning to Brazil, she spent nine years, until 2005, as a national advisor to the Brazilian Bishops’ Conference on the pastoral care of families. Once again in Rome, she helped with development of the Shrine and the International Schoenstatt Center in Belmonte, and after her return to Brazil she became the regional one co-responsible for the Schoenstatt Family Federation. At the moment, she is helping to record our rich provincial history for the future and is writing books.

“We are very happy and thank God for such a sublime vocation and mission,”