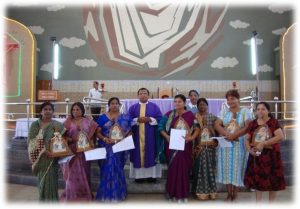 On October 18, 2007, a new stage in the history of Schoenstatt began in

One has even been sent as far as Russia, another one is being sent to London, and there are four pilgrim shrines in the Gulf States. All these pilgrim shrines go among the people from South India who study or work there. The Blessed Mother proves herself a Wonderful MOTHER in all their intentions.

Once a family came with a big request: their daughter had been married to a doctor for twelve years and they had no children. They had done everything possible, but with no success. Now the parents asked for our prayer. They brought a large candle weighing fifty kilos and lit it in the Shrine. They had planned to attend the Covenant Masses nine times and to persuade the Blessed Mother to intercede for their daughter. The Blessed Mother did not make them wait long. At the second Covenant Mass they were able to tell us with joy that their daughter was pregnant. They firmly believe that the intercession of the Blessed Mother has brought this about. The parents held on to their intentions and participated in the covenant celebrations on every 18th and prayed for a good birth. The daughter now has a girl.

The parents also had problems entering London. The Blessed Mother interceded for them and everything went smoothly. The parents are very impressed and released it for publication. We published it for the other families.

Their relatives also learned about this event. There was another couple in the family who had been married for five years and did not have a child. This request was also passed on to us, and the woman became pregnant in the first month and gave birth to a girl. I wrote the two testimonies in the newsletter. Of course, calls came from all directions asking to pray for a child. 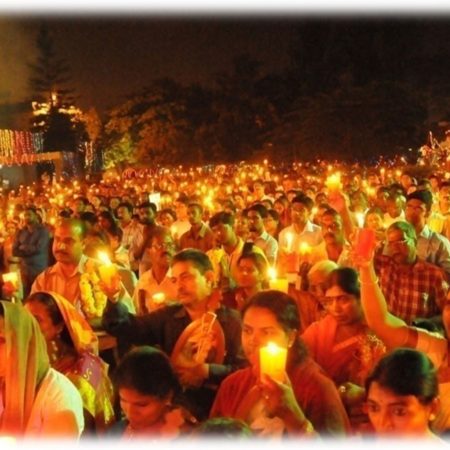 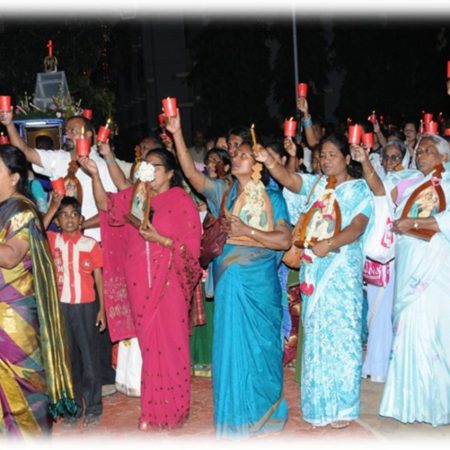 The wife of a Hindu priest also heard about it through her neighbor, who is a Christian. She also wanted to receive the Pilgrim Shrine. The neighbor was to obtain permission from me for her and make this possible. Of course I was happy to give permission. The Christian then assured her that she would have a child by this time next year. It was Advent time. Then they prayed together and say and write: On December 8th she gave life to a girl. Now she was afraid to show me the child because she feared that I would make her a Christian. So I did not visit the child. The main thing is that she had a child. Later she showed it to me.

Once again she came with the request for her brother. The Blessed Mother blessed her twice: They had twins.

The Blessed Mother in the Gulf countries

One woman had become so fond of the Blessed Mother that wherever she went, she always took her with her. Now she had the opportunity to go to her children in the Gulf countries. She was in a dilemma. What should she do? She did not want to leave the Blessed Mother at home alone. To leave her to someone else was not really what she wanted to do either. So she decided to take the  Pilgrim Shrine with her. It is not easy to take the Blessed Mother to the Gulf countries. Sometimes it is taken away when entering the country, the cross is torn off, etc. That is why it was a risk. The woman did not want to put the Pilgrim Shrine in her suitcase. She decided to keep it in her hand, and she got through the control well, without any difficulties. She is convinced that the Blessed Mother herself made everything possible.

Then she was with her children and she was very happy. When health problems arose, she went to the doctor and he found out that she had cancer, and had this already for seven years. The woman believes that she owes it to the Blessed Mother that it was discovered. She had treatments, everything went well and she is healthy now! She is firmly convinced that it was the Blessed Mother who took all this into her hands, stood up for her and healed her.

I could tell hundreds of examples.

The Blessed Mother works and she is a strong mother and educator.