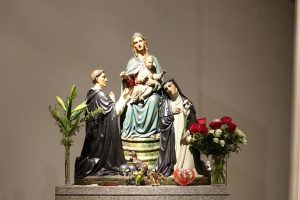 Sister M. Pia has once again excavated and investigated and brought to light events with small details, some of which were not yet known. One Schoenstatt Father humorously called them “holy moles”.

On the evening of April 12, 2019, an event with the main theme: 100 Years Ago – Placing the Memorial Plaques in the Original Shrine took place in the well-filled film hall of the Father Kentenich House. Sister M. Pia Buesge warmly welcomes the participants. She looked with us at the events of 2019 that were of special importance for Father Kentenich, especially the placing of the commemorative plaques in the Original Shrine. How did this happen?

Hanging the Heart in the Shrine

Sister M. Pia explains that there is a life process that took place at the origin of the two tables. It is an experience that all soldier sodalists made during the First World War: The Shrine in Schoenstatt is our home where the Blessed Mother’s heart beats for us, from where she guides and protects us wherever we are. The sodalists want to express their love, trust and gratitude, to have a sign for the Mother in the shrine; they want to be visible to her. There is an urge, a need that Father Kentenich later described as follows: “You want to put your own heart into our little shrine”. 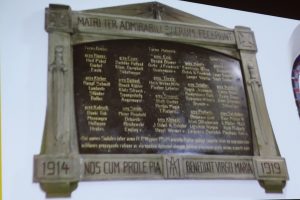 Early on, the desire to erect a “war memorial” for the Blessed Mother in the Shrine appeared in some articles of the magazine MTA. But of what kind? One suggestion, for example, was: On the altar of the shrine, under the Mother’s eyes, there could be a photo album. Whoever wants this from the soldiers’ sodalists, sends his photo – preferably in uniform and with a visible Congregation medal – to Schoenstatt so that it can be included in this album. Many do it. Soon there will be a second album, a so-called protective album, in which the names of all those who entrust themselves especially to the MTA and want to be protected by her during the war will be added.

The custom of sending to Schoenstatt their Iron Crosses by which they were honored for their brave behavior in war, continues to develop. They are aware that they could not do exemplary things on their own, but that they owe it entirely to the Blessed Mother. That is why the award should go where it belongs: to the shrine of the Mater ter Admirabilis. When Joseph Engling knelt in the Shrine for the last time, his Iron Cross was already there. First the Iron Crosses were in a box in the Shrine, later they hang on a plush board on the wall. 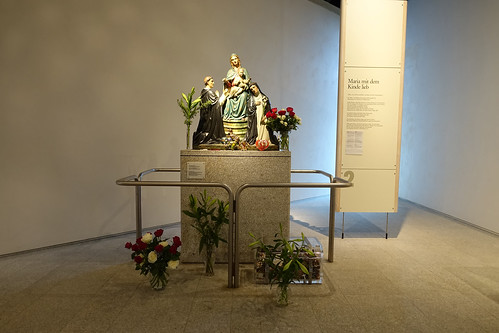 After the end of the war, on April 27, 1919, a reunion celebration took place in Schoenstatt, during which a marble tablet was solemnly blessed and unveiled in the shrine as a final and permanent “war memorial”. On it are the names of all 109 sodalists who belonged to the outer organization of Schoenstatt during the war. The names of the soldiers who died are also listed, and their names are marked with a cross, arranged according to groups and departments. Father Kentenich expressly wanted no name to be omitted from this plaque. It is first and foremost a plaque of honor for the MTA, who knew how to protect and use her instruments during the war. In the summer of 1919, the Iron Crosses were finally placed on the other side wall of the Shrine on a carved wooden tablet.

In January of this year, 2019, the two panels were cleaned and polished as part of the renovation of the Original Shrine. Sister M. Vanda reports about this exciting event. She and Mrs. Hug have painstakingly restored the tablet on the right side to its high gloss.  The names, which could hardly be read in between, were traced.

The evening in the Father Kentenich House had a second part: On this day it was 125 years since Father Kentenich consecrated himself to the Blessed Mother at the age of eight. Therefore, Sister M. Pia invited us to go together in silence to the statue of Mary. There was a prayerful atmosphere around the participants, who sing the song: “Hail Mary, for the sake of your purity, keep me pure in body and soul …” Father Kentenich formulated this prayer at an early age and prayed it all his life. Dr. Biberger addressed the Blessed Mother in prayer form and took everyone into the events of that time in the orphanage chapel in Oberhausen. He thanked that this consecration became the basic source of the Covenant of Love. With the common renewal of the Covenant of Love and the priestly blessing, the impressive little celebration closed.