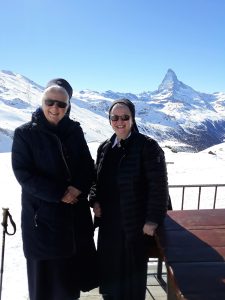 Two years ago I told our pastor about the Kentenich year and the desire to make our founder, Father Joseph Kentenich, more internationally known on the occasion of the 50th anniversary of his death. The pastor was very open with regard to Zermatt: Why should we not call out a Kentenich year after a Brother Klaus Year?! That can serve the deepening of faith. And so we started planning a Kentenich week – “in the shadow of the Matterhorn”!

One must go ahead

And now we look back gratefully: 116 participants attended six different events. Sr. M. Doria Schlickmann from Schoenstatt showed the film: “One Must Go Ahead” and presented her new book: “Joseph Kentenich – A Life on the Edge of the Volcano”. The visitors, especially the pastoral team, were very moved: “That was very impressive!”

Radiance, closeness to life and competence

Sr. M. Doria has convinced and inspired many by her lectures with her winning charisma, closeness to life and competence. The participants did not hear “only” about Father Kentenich’s life, but also what he has to say about topics such as: dealing with fears, esteem, new church image, personal ideal, culture of struggle and reconciliation.

The participants did not come pouring in in droves. In the smaller circle, however, there were dedicated and deep discussions of faith. Questions were asked about “Office and Charisma”, “Church on the New Shore” and tradition, co-responsibility of the laity and “dealing with the crisis in the church”. Young adults encouraged each other to believe and to live credibly. “There is nothing better than to talk about faith,” confessed a young woman. They are really still present, the young people who want to live an authentic Christian life and are not influenced by the environment. 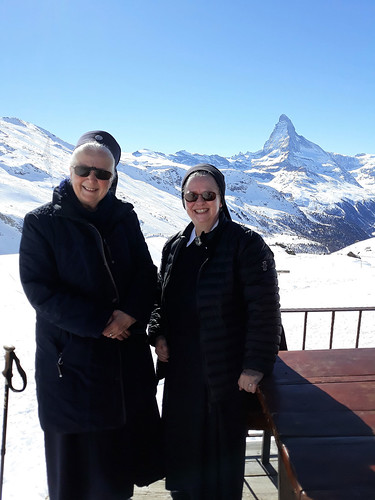 At the couple’s evening the lecture of Sr. M. Doria was followed by the contribution of a “family trainer-couple” about the topic: “Marriage can succeed”. Both addressed the differences between men and women, which sparked a lively discussion. One woman said that she could take a lot from this evening and wanted to “work on her own” in the future in favor of a better climate in her family. In seven Sunday Masses, Sr. M. Doria was asked to preach. There were a good 1000 worshipers in attendance, some of whom cordially thanked for the sermon that had given them much.

The Kentenich week “in the shadow of the Matterhorn” found many positive echoes. One would have wished that many more people would have enjoyed these evenings!