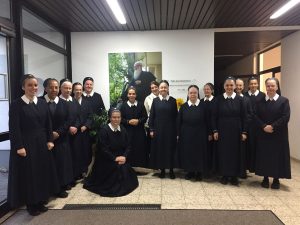 These two words wonderfully describe a weekend that we experienced as a sisters filiation in the shadow of the Original Shrine. Once again, it must be said: Because we 15 sisters from seven different countries are always allowed to experience something new:

the Mother of God is at work.

She attracts people and she gives grace. For this reason we Sisters of Mary are on the way on her behalf.

Mostly, after a weekend, we meet again for dinner on Sunday, and each sister brings her adventures and experiences. Our dining room sister Sr. M. Medardis has lovingly set the table and we are happy to be back home.

On her behalf, on the way 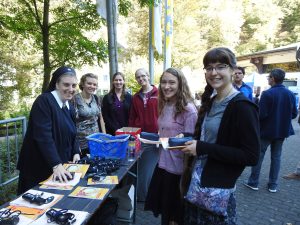 Sr. M. Jennifer from the English-speaking office has accompanied a youth group from the US military in recent days. The young people were preparing in Schoenstatt for their Confirmation and were able to get to know the pilgrimage site better. The Schoenstatt spirituality has touched them very much. It’s already the third weekend that Sr. M. Jennifer has spent with a US military group.

On Sunday afternoon, Sr. M. Jennifer then met the African friends who once a month celebrate a holy Mass in the house chapel of the Pilgrims’ house.

Sr. M. Isabel has many beautiful experiences to share. She looks after the Portuguese-speaking pilgrims. This weekend, a larger group of men from Belgium was in Schoenstatt. They belong to the Rosary Campaign which has its origins in Brazil. While the men celebrate Holy Mass in the Original Shrine, Sr. M. Isabel joins them with a Brazilian family. Little Lorena belongs to the family and the parents want to consecrate their child to the Mother of God. After the service, Sr. M. Isabel tells everyone in the shrine the intention of the family. She can tell from the faces of men that they are thinking of their own children. In Brazil, the consecration of a child is a well-known custom. Therefore, Sr. M. Isabel invites the fathers to pray silently for their own children at the consecration of Lorena. A deep prayer atmosphere can be felt in the shrine.

In the afternoon, the Rosary Group is in the Founders’ chapel on Mount Schoenstatt and again they meet the family with Sr. M. Isabel. One of the men spontaneously approaches little Lorena, kneels down in front of her and tells her to pray for his two girls. He gratefully embraces her. Another man says jokingly, “Two girls? His children are already 16 and 23 years old.” But for the family man, they are always his two little girls!

The other two sisters from the International Secretariat were also on their way these days.

Sr. Maria Andrea, originally from Ecuador, returns from a trip to Wiesbaden, where she had a meeting with the Spanish-speaking mission.

And again and again there are many single pilgrims who come to Schoenstatt these days and want to be accompanied: from Paraguay, Argentina, Chile …  For Sr. Maria Andrea, the Sunday afternoon always belongs to the people and pilgrims celebrating the Sunday mass in Spanish in the house chapel of the Sonnenau.

The head of the International Coordination Unit, Sr. M. Cacilda, had a communication team meeting this weekend. Again, employees from several countries come together and work together.

“Our family, our splashes of color”

Sr. M. Doriett was at a meeting at the House of the Families. Eleven families from Cologne-Pulheim had a family weekend there. It is already their second meeting and in November they want to come back. The topic was exactly fitting: “Our family, our splashes of color”. Quite spontaneously there still came in the full program of the families a request from the pastor from the center of Koblenz, who spent the weekend with almost 50 confirmants and catechists in the youth center on the Marienberg. He wanted to hear something about the place with the group, but also to introduce young people to people who were inspired by the Spirit of God. After an impulse from Sr. M. Doriett, Sr. M. Vanda from Brazil, who is now a sacristan at the Original Shrine and also a member of the Pilgrims’ House, tells the group her testimony. One senses that there are attentive listeners in the circle. A visit to the Original Shrine completes the morning of this Confirmation group in Schoenstatt. 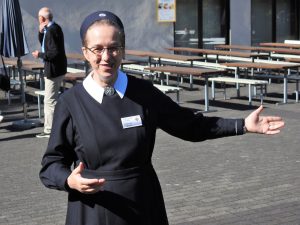 Heartfelt Welcome to the Pilgrims House!

Because Sr. M. Rosario, who is responsible for the information desk in the Pilgrim Center, is currently in Argentina, Sister Mirjam has taken over that ministry this weekend. As always, there are pilgrims from different countries who come and have a concern.

Many pilgrims also like to shop in the gift shop. The well-known store sister, however, is not there this Sunday. Sister M. Doris is at a fair in Frankfurt and there looks for new goods, which she can later offer in Schoenstatt.

Sr. M. Lourdes can welcome many guests to the pilgrim’s house this weekend. It’s always international. It is a great help that Sister M. Lourdes grew up multilingual.

Three sisters are on Mount Schoenstatt for a few days. They participate in a retreat and strengthen themselves in silence and in prayer for the time to come. And they are the prayer power in the background for the others these days.

The two sisters of Haus Sonnenau are also part of the Pilgrims’ House filiation. Sr. M. Sara looks to the details in the Sonnenau these days. Actually, she is the sacristan of the pilgrim’s church, but for a few days she is responsible for the house management, because the responsible sister is on retreat.

Right in the middle of it all and enthusiastic

– we are the sisters of the Pilgrims House in any case. It gives us all a lot of pleasure to lead the pilgrims to the Original Shrine and the Founder Chapel. Our work is often unpredictable and much is spontaneous. Nothing is too much for the Blessed Mother and our Father and Founder!