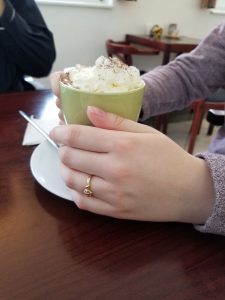 … and Schoenstatt in the Wide World

What does hot chocolate have to do with Schoenstatt in the wide world? Very much – at least in the café on Mount Schoenstatt…

I have been working at the mission headquarters in Schoenstatt for many years. I am always fascinated by the international nature of our Sisters family, and whenever I have the opportunity, I draw attention to our commitment on all continents. My experience is that many people are impressed and like to come in contact with Schoenstatt worldwide.

Place of encounter from near and far

In my second task – in the café on Mount Schoenstatt – I have this opportunity every day. In addition to the regulars, who are usually from the region, pilgrims come from all over the world. They visit the tomb of Father Kentenich in the Adoration Church, perhaps also the Father Kentenich House, and fortify themselves with coffee and cake in the café. Not only do they buy one or two souvenirs from Schoenstatt, but they also enjoy the opportunity to ask questions about our sisters, Father Kentenich and Schoenstatt in general.

South American guests are almost part of everyday life, but visitors come from many other nations. Some are accompanied by a sister from our international pilgrimage team. Especially it touched me, when some time ago – on a normal working day! –  pilgrims from all continents all  found their way at the same time to the cafe. 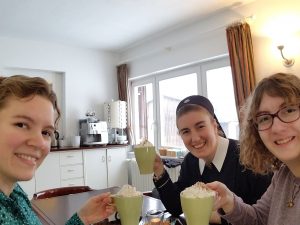 It gives me great pleasure that visitors from many countries find their way to the café – even if the communication is often a bit bumpy or consists of a mixture of languages. The main thing is, the “heart language” is right – true benevolence and interest in other cultures allow one to experience a family atmosphere. 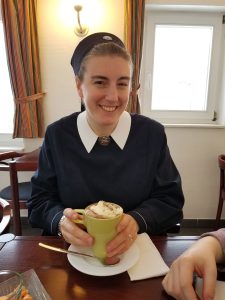 Experience the world in Schoenstatt

Some visitors are in the Schoenstatt for the first time and take the opportunity to ask more about Schoenstatt in the café and perhaps to learn something they have always wanted to ask a sister. Our internationality is a popular topic, and again and again comes the question: “Sister, were you already in the mission?” And my answer? “No – I do not need to fly abroad, because here in Schoenstatt I experience the whole world through fellow sisters and pilgrims from many countries!”