Sr. M. Elena, our pilgrim sister at the Schoenstatt Center Oberkirch, received a request from the Department for Pilgrims and Pilgrimages in the Diocese of Freiburg to work for one day, even though two sisters were already there, at a booth at the CMT fair (Camping Motor Tourism Fair) in Stuttgart,

After our acceptance, we were sent information about the themes and the planned procedure that should help us. We also received the roster, the hall plan and tips for cooperation during our presence at the stand. The entrance ticket was deposited at the entrance east in the info area with the hostesses. 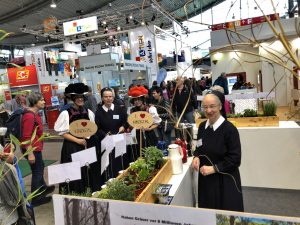 Keyword: church services at the fair.

So we left on Monday, January 14, 2019 and, shortly after 9.00 a.m., were at the exhibition center near the airport in Stuttgart. It was busy and many exhibitors were looking for a parking space. Passing several informational signs that helped us, we found a suitable parking lot in the Bosch parking ramp. From there we quickly reached Hall 6 with the stand for ecclesial services. We received a friendly greeting from the responsible persons who welcomed us. Then we received an introduction to the day. The fair guests were only admitted to the halls at 10.00 o’clock and thus it was still relatively quiet at the beginning.

The thematic focus of the exhibition in this year 2019 marked the various activities and events. It read:

So there were many medicinal herbs in pots on our stand: sage, calendula, St. John’s wort, ginger, etc. All were beautifully labeled. The sisters from the Reute Monastery have made these available, as well as the seven-grass tea and the summer tea, which we offered to the fair participants. In the background, fresh tea was boiled and the cups were rinsed.

A wide range of information was available about monasteries, pilgrims, tourism, pilgrimages and much more. We also had brochures from Oberkirch and were allowed to classify them with the others and distribute them directly. From Liebfrauenhöhe we had the annual calendar and the house brochure.

Above the booth, the logos of the four organizers were on display: the logo of the Archdiocese of Freiburg, the Diocese of Rottenburg-Stuttgart and the two Protestant churches. This cooperation has only existed for two years. It was a very good mix. So we were a good team. Beside us two sisters there were also a Protestant pastor and some ladies and gentlemen from the Ordinariats.

We should inform the visitors to the fair about offerings in church and tourism, especially this year about

Offers in the area of ​​the monastery gardens and at the Country Garden Show.

The aim was to inform the people about the wide variety of offers, including the pilgrimages, the retreats, etc. Therefore, it was necessary to get acquainted with the various topics on the stand. The visitors should have the impression that in the field of tourism, the church has for me personally, good offers to choose from.

So we were well motivated and equipped for the day and looked forward to everything coming. There were many opportunities and good conversations over tea. We were able to show the annual calendars and house brochures of Oberkirch and Liebfrauenhöhe with pictures and invite those attending the fair to visit us.

Some knew of the Liebfrauenhöhe and had already passed it on the Way of St. James there. A woman told me: She unexpectedly came to the Liebfrauenhöhe as the sisters were praying the rosary in the church. That was a special experience for her. She was beaming with joy when she told me that.

Another woman was looking for a house for a short break to unwind. I also could help her and offer the brochures for a quiet week in Oberkirch. I invited young families with children who were interested to come over.

A gentleman who was very open to everything religious told me that he was Protestant, and asked if he could still come. There were many nice and good conversations and many were happy to see sisters at the booth. They just could not pass by without saying a word and rejoiced at the hot herbal tea. The Protestant pastor, who was with us at the booth, was surprised that the visitors liked to approach the sisters. He also wanted to come in the pastor’s robe next year, which would have a special effect.

In between, we alternated as the team at the stand and once in awhile went alone through the hall to see what else was offered. I noticed everywhere that the sister’s dress was affecting the visitors. There were friendly looks, visits to our stand, a nice word, a gift, a big bag full of advertisements to take along home, an invitation to visit Bad Duerrrheim, etc.

This apostolic day made us very happy. We felt that sisters are valued and people are happy to see them. The people responsible have already invited us for next year. There was a wonderful working together.