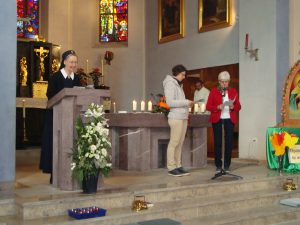 A:  Has anyone ever said to you, “You’re still as you used to be-still the same?”

B:  Yes, but … I do not consider that a compliment. Mostly this means: you have not changed, not developed what’s inside you. You are stuck.

A:  Every life needs change, change for the better and sometimes a new beginning! … But: one cannot do that!

B:  But one can do it – only not alone. In over one hundred countries, people have received the grace, the gift of change – through the Schoenstatt Shrine and through the visit of the Pilgrim Mother.

A:  Father Kentenich said to the students in 1912: “The more external progress, the greater inner depth. The degree of our progress must be the degree of our spiritual growth. “

B:  Yes, optimization is possible! Someone told me about a failed study project. And the reaction of the professor?! “That is still optimizable!”

A:  Exactly, we are all capable of optimizing….even into old age. An 85-year-old Sister of Mary came back from reflection days and said beaming: “Now I will begin a new life!”

B:  And the Pilgrim Mother gives us the grace of change! …

Thus began a conversation at a meeting of the German speaking people who receive the Pilgrim Mother each month. About 170 people came. The “Pilgrim shrines” which were brought were placed in the shrine.  The theme of the meeting was: “Optimization is possible!”The topic was about the grace of inner transformation which we receive in Schoenstatt shrines. After a family Holy Mass the pictures of the Blessed Mother were blessed and sent out again. 850 pilgrim shrines are underway in all Cantons in Switzerland and all areas of Liechtenstein! 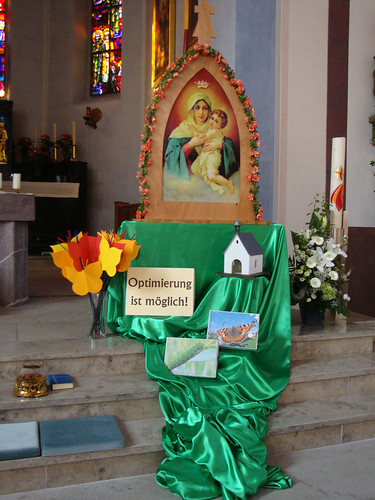 Experiences: Through the visit of the Pilgrim Mother, change happens

One family reports: “We are calmer, more relaxed and less ‘belligerent’ when Mary is visiting us. And we have become more attentive to beautiful things and experiences. Every visit, we write a thank you note. “

A woman says: “I decided when Mary is with me, I will not turn on the radio all the time.”

A family was accidentally sent too much goods by a company. The woman thought she would just keep it. Then her eyes fell on the pilgrim shrine and she sensed that this is not right. She phoned the company; they thanked for the honesty and said she could keep the goods

A married couple only rarely spoke to each other. When the Pilgrim Mother came to visit, the man suddenly proposed that they pray together. The woman did not expect this and was totally surprised.