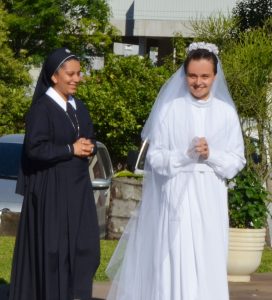 On November 10, 2018, the solemn reception of the young Miss Renata Zanchin into our Secular Institute of the Schoenstatt Sisters of Mary took place. It was the culmination of a five-year long journey since she met the Sisters of Mary and decided to follow God’s call to our institute. The retired Bishop, Dom Elói Róggia, who previously worked in the Prelature of Borba, Amazonia, and is a member of the Pallottine Community, was the main celebrant at the Reception Ceremony. Two other Pallottine Fathers, a Schoenstatt Father, a Deacon and two seminarians also participated in the fesive service.

The family members of the novice, pilgrims from her home parish and members of the Schoenstatt Family of the diocese of Frederico Westphalen traveled about 450 km (280 miles) in two buses to attend the celebration. The Schoenstatt family from four other dioceses of the state of Rio Grande do Sul, especially young people, and a group of young women from Santa Catarina made a night trip to participate in the reception.

There was much to do in preparation for this festival, and the Schoenstatt Family in Santa Maria also helped a lot. So for example, they took over the responsibility for the lunch that took place after the ceremony. For the girls’ youth of the Archdiocese of Santa Maria, this reception was a very special event, because two of the novices, Sister M. Antônia and Sister M. Renata, had belonged for a long time to the local girls’ youth.

In glorious, summery sunshine, the solemn entrance began at 9:15. Dressed in white, the novice moved with  her co-sisters, who had their reception in Garanhuns a week before, the novice mistress and the provincial leadership in the footsteps of our father and founder from the Provincial House to the Schoenstatt Shrine. There they were awaited by the bishop. After the consecration prayer and Episcopal blessing, the parents joined the procession and led their daughter to the Tabor church, where the solemn reception was to take place.

“The Blessed Mother has sent the lilies!” 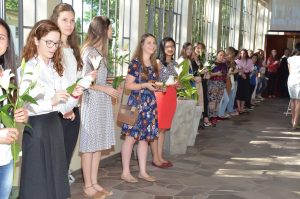 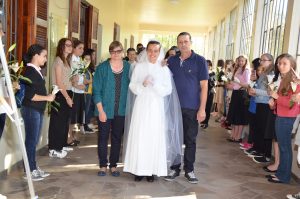 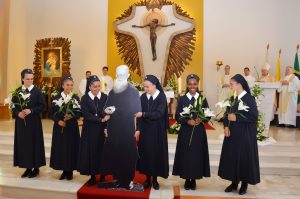 Accompanied by the sound of the sanctuary bells, the procession passed by the young people who applauded spontaneously, expressing their pleasure in the vocational decision of Sister M. Renata and the five novices from northeastern Brazil. In the corridor leading to the Tabor church, the novices were expected by the girls’ youth and young women holding white lilies in their hands.

The floral decoration of all rooms radiated the beauty of the lilies again: they adorned the chapel, the shrine and the whole house. “The Blessed Mother sent us the lilies,” said Sister Jessica Maria, who is part of the organizing team. Throughout the city, the sisters had not found a single lily in the flower shops when they searched for them. On the eve of the reception, however, a florist brought a car full of lilies to the movement house. Soon the mistake was discovered– the lilies were destined for a wedding which was to take place only a week later.

The florist had confused the date and brought the flowers a week early. A mistake? Certainly not! It was a gift from the Blessed Mother, a sign to illuminate the mystery of the vocation to virginal life in undivided devotion to God and his kingdom.