Within the 50th anniversary of the death of Father Josef Kentenich, a new film about him and his life and work has emerged. “One must go ahead” is the title that promises much.

On September 13, 2018, this film premiered in the Father Kentenich House. And in the weeks that followed, several thousand spectators could see it there.

The film is something special in several ways. It is a documentary drama, that is, a documentary that is supplemented with re-enacted scenes, presented by actors.

It was made by a Sister of Mary, Sister Francine-Marie Cooper, who has studied communication design for more than three years.

The director herself tells:

I have often been asked how I came to make a film about Father Kentenich. In hindsight, I have to say that Divine Providence has guided everything on this path.

I did not intend to tackle such a big and, for me, daring project during my studies. During the first years of my studies, I had made three short films, but I still did not feel able to do such a thing. I thought, maybe sometime in the future. I am very aware that the medium “movie” is very powerful. In fact, the world of the media and today’s technical possibilities offer us a great opportunity to convey the message of faith – and for us as Schoenstatter: the message of Schoenstatt – to a wide audience. But now again to this film:

As we approached the fiftieth anniversary of Father Kentenich’s death, I could not stop thinking: Oh, if only I could … I put everything in the hands of the Blessed Mother and said: I’ll try, but you have to see that something comes out of it and that I find everything I need.

The first thing was that I had to convince my professor to allow me to do such a big project, and also with a religious theme.

That went pretty fast. After I had told him a lot from the biography of our founder, he said: That’s really exciting! It will be hard to get it all in less than an hour.

So in autumn 2017 I started with this “Doku-Father Kentenich”, as the working title was then called. The big challenge at the beginning was: what do I say or show and what not? What is the common thread?

Looking for a faith journey suitable for everyday use

In the thought of the “Path-finder” – which Father Kentenich himself used, by the way – I found a good picture of what he experienced in his life and deliberately set in motion.

He lived in a time that was characterized by upheaval, even in the church. The person of the 20th century sought self-determination, freedom, authenticity and a new wholeness. Father Kentenich did not see that as something negative, on the contrary. As a student he had tasted the difficulties of modern man himself and found a way out of them. He found this way in the person of the Mother of God, Mary. She, the Immaculata, was the way God originally intended man to be: whole, very genuine, very untouched, very one with himself, with the world and with God.

In the relationship with her, in covenant with her, Father Kentenich has discovered this new way for the people of our time, a faith journey suitable for everyday life. God used him as a “path-finder,” he preceded us. He first explored the way, and thus he could make it ready for others.

I could still tell a lot about how I came to good locations and actors with the help of many good contacts from our sisters’ community and the Schoenstatt Movement.

There is a story behind almost every one of the actors. Since no “Hollywood budget” was available for this film, I worked largely with amateur actors. Almost all of the fellow players came via personal contacts. 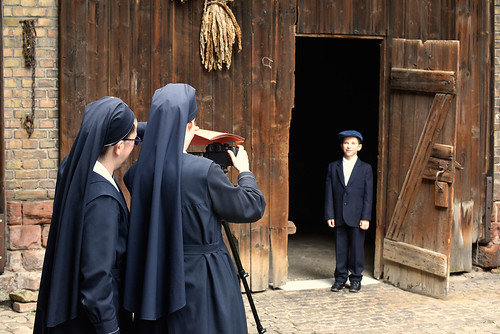 For the founding scene and the classroom scenes, we found our actors about the Schoenstatt Boys’ Youth.

All actors for the childhood scenes came from the Palatinate, a place in the southwest of Germany.

Also there we were obviously led. I was looking for locations and remembered the old classroom that was built at Schoenstatt’s 100th anniversary. A co-sister knew that in a place in the Palatinate, in Ottersheim, there is a classic car club and that in a barn there is a kind of museum with rooms from the time of 100 years ago. I went there and loved what I found.

For the founding scene, we even painted the inside of the shrine in Herxheim, also in the Palatinate, partly in blue, just as the original shrine looked on 18 October 1914! That was a great experience! 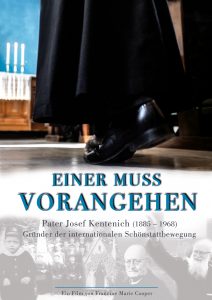 All around, the project was blessed, and I am pleased that the finished film has so far received so much favor with the audience.

Without the help of many diligent hands, generous hearts and without the great power of prayer that accompanied the creation of the film, it would never have been realized. At this point, I would like to sincerely thank everyone who has worked in any way on the realization of the film: