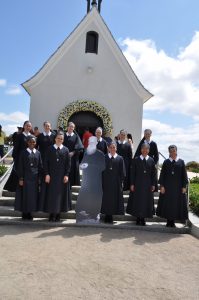 November 3, 2018 was a landmark in the history of Garanhuns, in the state of Pernambuco, in northeastern Brazil. For the first time a reception of the novices of the Schoenstatt Sisters of Mary took place in this region. After a year of preparation, which intensified as the young women moved to Santa Maria, Rio Grande do Sul, the big day finally arrived. The five novices, their novice mistress and provincial leadership formed a true pilgrimage that traveled 3,800 kilometers (about 2,400miles) from the extreme south of the country to this region of northeastern Brazil.

Family members, friends and members of the Schoenstatt communities, priests, members of religious orders and seminarians from five dioceses of the Northeast also set out to participate in this procession at the “Tabor Shrine of Labor Day Saints”. As a result, more than 1,500 people from all over the world attended this celebration, but many in Brazil and other parts of the world had the opportunity to watch a live broadcast made possible by the Pastoral of Communication of the Garanhun diocese, PASCOM. Dom Paulo Jackson Nóbrega de Souza, diocesan Bishop of the Diocese of Garanhuns, officiated at the reception ceremony accompanied by 20 priests, 2 deacons and 14 seminarians.

The big day speaks to us

… of a joyful and unreserved yes,
of a totally dedicated yes, a brave yes, able to risk everything for the one who called her.

In the morning, punctually at 9 o’clock, the novices in their white dress stepped out of the house of the Sisters of Mary and went to the shrine where the bishop expected them. There they consecrated themselves to the Mother and Queen of Schoenstatt and requested the blessing for the beginning of their journey as Sisters of Mary. The parents of the novices accompanied the solemn entrance and led them to the place of the Holy Mass. The father of a novice admitted, deeply moved: “I was allowed to escort a bride to the altar and give her to the divine bridegroom, the best son-in-law which a father can ever have!”

… of a Marian dress given to those who “found mercy before God”.

A dress that speaks of the Eternal;
that announces the beginning of a new life and victory over the world;
a world whose interests no longer appeal to people.

The dress is a symbol of the inner attitude, of being the bearer of a divine mission for which it is worth offering one’s own life.

In his address, the bishop, Dom Paulo Jackson, indicated the symbol of dress in the Holy Scriptures and in various sectors of society. Clothes say something about the mission of the one who wears it. In this way, the dress received by the novices on this day testifies to their mission as Sisters of Mary to be living images of Mary in the world. Dom Paulo referred to the image in the Apocalypse, which speaks of the elect who made their “vestments white in the blood of the Lamb.”

And he emphasized the preconditions necessary to consecrate one’s life to God: first, it is necessary to solve the humanly fundamental questions of charity, love, dignity and reverence in one’s own life; the second step is to secure the Christian duties, to love the church and to be ready to serve it. Only then is it possible to take the third and most daring step: to give one’s life and devote this life fully to the service of God and his kingdom.

… of the veil of a virgin, a mother and a bride – the crown of a noble royal child. It is a veil that marks the forehead with the seal of total dedication: eternally given away, accepted unconditionally, and answered in totality.

The shining of the eyes and the joy of the smile testify to the certainty that the chosen path and the spoken yes are the grace of God, who selects the weak and small to reveal himself to the world. “I have experienced the heavens here!” a woman, who had traveled far, said of this celebration.

… of a covenant promise that contains an eloquent language in itself: “Yours forever, my Lord!” To belong completely to someone is what a noble heart seeks.

“I choose the MTA and Schoenstatt as my way of holiness”.

This motto that the novices have chosen for this day is an expression of the need to take the risk of love, but not alone, for our human weakness constantly surprises us on the sidelines. They have decided to join this path in community, as a family, therefore they speak their yes of love and dedication to the community of Schoenstatt Sisters of Mary and are fully committed to their mission:

The new names of the novices: 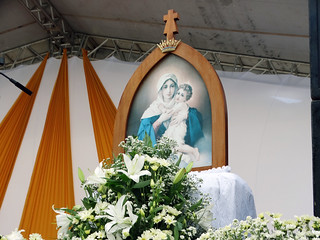