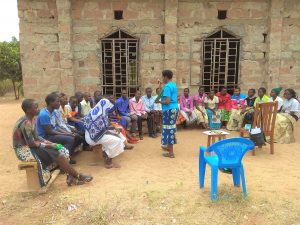 In August Sr. M. Iona from Cape Town South Africa travelled to Kenya for three weeks to visit members of the growing Movement. Her journey took her to Nairobi, Saba Saba, to Kabibi  near Bungoma in the north west of Kenya, and Mugoiri, for a Girls’ seminar which was attended by  85 young people attended.

During her visit she accompanied Sr Philis, one of our Kenyan sisters, who is spending three months working in Kenya and Pauline a young Kenyan and dedicated Schoenstatt member. This was not the first time Sr. M. Iona was in Kenya. She started travelling there in the year 2000 and over the years has seen the growth of the Schoenstatt Movement.

Seminar for a group of Mothers

Saba Saba in the Diocese of Muranga is a town situated 60 km north of Nairobi. Sr Iona was invited there by a Schoenstatt member to give a day’s seminar for a group of Mothers who are interested in the Mothers’ League. It was a joy to see 50 mothers attending the day workshops. They were led into the spirituality of Schoenstatt using the Schoenstatt Logo and emphasising the covenant to love with Fr. Kentenich, because getting to know the founder is the best way to   know Schoenstatt. During the presentation there was time for questions and the mothers wanted to know how Schoenstatt can influence their lives, how it can help them.

Sr Iona noted that there is an increase in single mothers over the years, which raises pastoral concerns. In Saba Saba she also met with the Parish priest who had come into contact with Schoenstatt in the seminary when Sr M Joanne visited them. For him this visit led him to a deeper appreciation of Schoenstatt’s spirituality. He commented that he had received a deeper insight into the person and task of Our Lady.

Experience with the Pilgrim Mother

The following day Sr M Iona set out on a seven-hour bus journey to Bungoma in the North West of Kenya just thirty-five kilometers from the Ugandan border. In 2015 the Pilgrim Mother began in the area and today there are over 300 people involved in this apostolate from various social classes. Sr Iona witnessed the Pilgrim Mother being passed from one house to the next, accompanied by a group of about forty people. They were dressed in the Kenyan Schoenstatt uniform which is patterned on the one made for the year 2014. It is customary that every organization has its own uniform – hence one also for the Schoenstatt members!

Before receiving the Pilgrim Mother, the members of the home took time to prepare themselves for their important visitor. Prior to the visit of Our Lady the house was well spring-cleaned and their hearts were ‘made clean’ through the sacrament of confession. Sr Iona was impressed to observe how the father and mother of the household knelt down to receive the Pilgrim Mother with such reverence and the conviction that it was not just a picture visiting their home but indeed the Blessed Mother herself.   The handing over of the Pilgrim Mother ended in a festive meal. 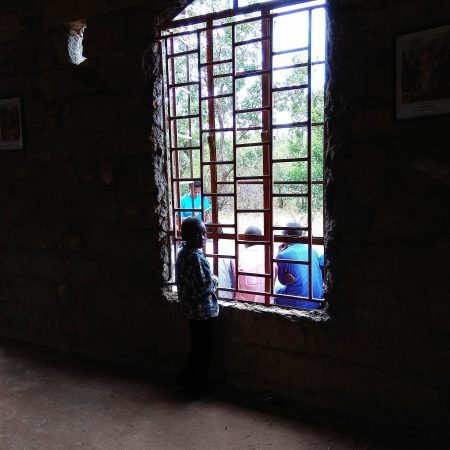 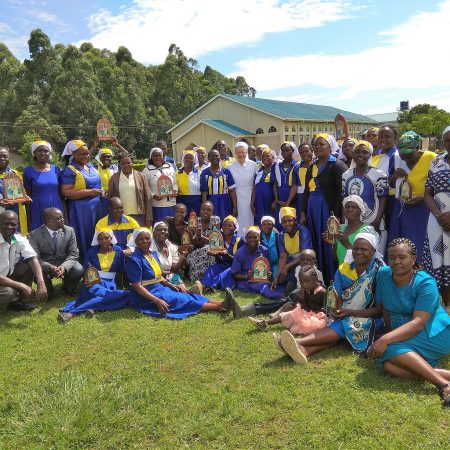 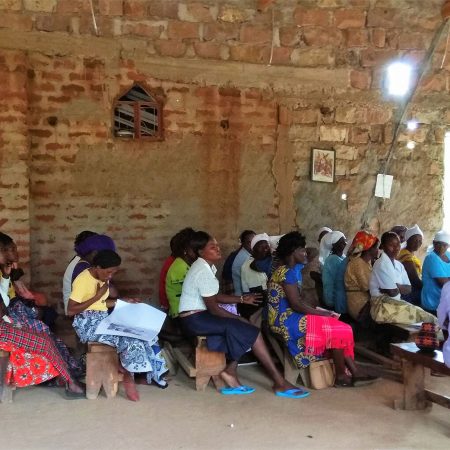 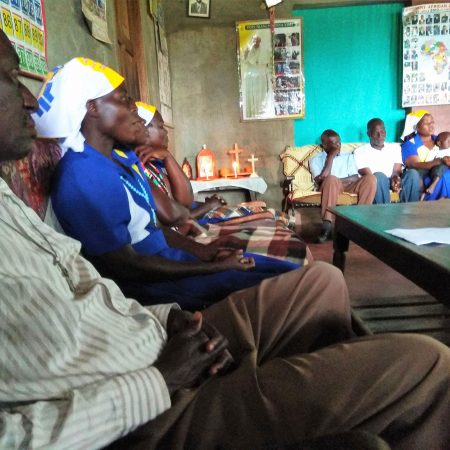 The next event on the program for Sr. M. Iona was a three-day seminar in the parish of Kabibi in the diocese of Bungoma. It commenced at 9am and concluded at 5pm each day with 45 people of different ages in attendance. The logistics of the seminar were prepared by the people them- selves, the catering, the venue, the program. They too had their own Schoenstatt uniforms.

From the beginning Fr Kentenich used everyday experiences and symbolism to explain Schoenstatt’s spirituality. In conversation with the leaders of the Movement in Kabibi Sr Iona discovered that the people have a common way of building a fire. Three stones are used to make the fire.  By using this reality, she could explain the three points of contact, Our Lady, the Shrine and Father Kentenich. Each of the stones are necessary and have to be balanced to hold the pot just as the three points of contact are necessary to understand Schoenstatt. The people concluded that the fire wood symbolizes the capital of grace otherwise the fire of Schoenstatt won’t burn. Thus, the three days of the seminar were used to discuss and reflect in depth on the Shrine, Father Kentenich and his biblical image of Mary.

Confession a highlight of the Girls’ Seminar

As mentioned, 85 girls took part in the seminar. This came as a pleasant surprise as only 45 were expected. Sr Philis who was conducting the seminar assisted by Sr Iona managed admirably to stretch the resources e.g. food to keep everyone happy and satisfied. The highlight for Sr Iona was the fact that more than 50 young people went to confession, much to the surprise of the local priests. It has become a custom over the years to explain the meaning of confession to the young women so that it’s relevant for them. The seminar concluded with each girl making a home shrine which they took home with them.