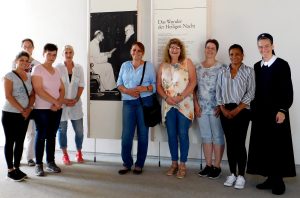 In September 2018, the “Housekeeping Team ” of the Marienland Educational Center on Mount Schoenstatt came together for the second time for a training course in the Father Kentenich House. These team trainings take place at regular intervals – usually monthly.

In 2018, the accent, along with technical and internal questions, was to get to know more about the founder of the international Schoenstatt Movement as the actual “boss” and to become acquainted with his wishes for the team.

As part of this orientation, the new film aroused interest in Father Kentenich. The title “One must go ahead” can be very well transferred to the work in the Educational Center.

One must go ahead

In 53 minutes, this documentary shows Father Kentenich’s life as a “Scout”. According to Sr. Francine-Marie Cooper, who made this film, this is a good picture of what the founder of Schoenstatt experienced and set in motion in his life. God used him as a Scout. In covenant with Mary, he has discovered a new way to live the faith today. An everyday path of faith!

He himself remained true to this path through all the difficulties of his life. Courageously and confidently he went on the path to God, even after all setbacks.

And his work is not over with his death on 15 September 1968. He continues to lead the way and invites us to come along.

The Scout of God

In the film, various elements are used for the presentation of this content: original material from the time, eyewitness accounts and also scenes recounted by actors. The connecting element is a wanderer “of today”.

This type of presentation impressed a colleague especially. She says:
“The combination of modernity and the past has impressed me. The scenes with the wanderer of today and the connection to the life of Father Kentenich I found successful.”

Another was of the opinion:
“I am touched by how Father Kentenich carried the burden; Always to keep struggling and keep going.”

And the statement of another team member probably summarizes the experience of all:
”Through the film I have once more taken in the life of Father Kentenich in a different and deeper way ”

Housekeeping is a matter for the boss

After the film there was still time to take a closer look at one or another detail of Father Kentenich’s life in the exhibition area of the Father Kentenich House. The focus this time is the period after his release from the Dachau concentration camp and the return home from exile at Christmas 1965.