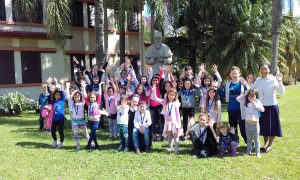 In 2018, Schoenstatt children around the world will celebrate the 50th anniversary of the home-going of their father and founder into eternity. This anniversary was not forgotten in the kindergarten which bears the name “Mariengarten”. In September 2017 there began an intensive preparation. The highlight was on September 15 and 16, 2018, with the Second Congress of the “Friends of Kentenich” and the publication of the book “Joseph’s Star”.

A total of 36 children and adolescents between the ages of 5 and 12, students and alumni, accepted the invitation and celebrated the anniversary year together with the participants of the Congress of Fr. Kentenich’s friends in Santa Maria. One of the highlights of the Congress was the publication of the book “Joseph’s Star”, coordinated by the teacher Maria Elise and Sr. M. Jessica. The book, whose second edition is published in three languages ​​- Portuguese, German and English – was written by a Sister of Mary, illustrated by schoolchildren and teachers, as well as supported by many helpful hands. The theme of the book is the founding of Schoenstatt, written for children. With the publication of this children’s book, the teachers of the kindergarten “Mariengarten” fulfilled their plan to promote Father Kentenich in the families of those children who attend this school.

In addition to the adventure of spending a night at the school, doing a treasure hunt, or enjoying marshmallows around the campfire, Father Kentenich’s friends have learned a little more about their friend. A video specially prepared for the Congress aroused some reflection in the group and many expressed their impressions: “So Father Kentenich was 14 years away from his family? Did he miss them?”  Another said, “What touched me most was the hour when Joseph’s mother dedicated him to the Mother of God because she could not look after her son alone.” These and other comments showed how attentively they had followed the story of Father Kentenich. 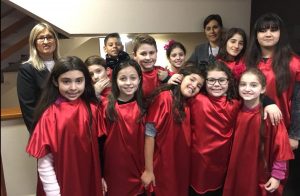 During his life, our father and founder affected everyone with his joy. Now, in his new way of being, it cannot be otherwise. The joy of the children at the shrine marked the completion of the Second Congress of Fr Kentenich’s Friends, and passed the joy on to all who came. On Sunday morning, the group gathered in the courtyard of the shrine to follow in the footsteps of Father Kentenich. An original contest made a joyful encounter with Father Kentenich possible: a memory game about the three contact points, “Heaven and Hell” with messages from Father Kentenich, a word game to put together the word “Ken-te-nich”, wheelbarrow racing and so on– walking in the footsteps of the founder … There was also a time to rest, to talk together about the virtues of a friend: faithfulness, patience, doing everything to give pleasure to others, not fighting, helping whenever the other one needs it. 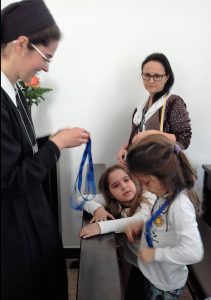 Father Kentenich is our friend

In the historic room of our Provincial House, where Father Kentenich lived several times during his stay, the children prayed in thanks for the Congress. There everyone could entrust a secret and a request to his friend Joseph Kentenich. Then they went to the shrine, where they received a medal with the picture of the book “Joseph’s Star” and they took this home as a sign of their mission.

Every little friend of Father Kentenich is called upon to be a star shining with the light of a true friend, knowing that his star – Father Kentenich – shines for us from heaven and especially in the Schoenstatt shrine.

The Second Congress of the Friends of Kentenich was very simple, but rich in experiences. In this way our father and founder will become ever more known among our children! 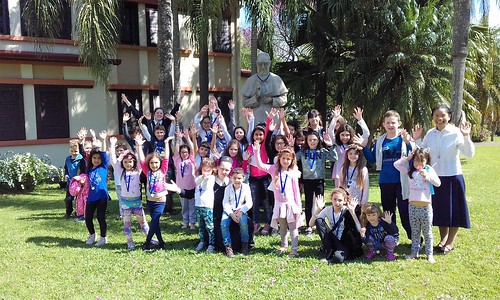