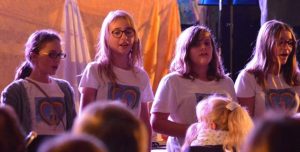 Quite unexpectedly Sr. Julia-Maria and I received an invitation of a special kind this fall: Joseph Engling called us to Cambrai on the 100th anniversary of his death! On the morning of October 1, 2018, we set off with our station wagon and took along many things that would help us there. Our house, the foyer de Schoenstatt and the shrine were waiting for us – and of course Joseph Engling and all expected groups and individuals! We were highly motivated to actively participate in this unique event.

We would like to recall some of the many wonderful impressions that can complement the numerous beautiful reports. The video-show attached, awakens these impressions again. 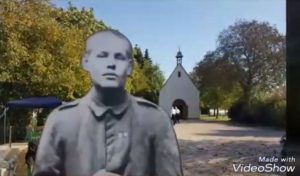 When we arrived there was already a great deal of life and work around the shrine. In the days before October 4, numerous volunteers from the “Equipe de Josef Engling” work so that the shrine, the house and grounds sparkle with order and cleanliness, all deliveries arrive on time, the Internet is strong enough, the large festival tent is constructed, lyrics are ready and much more. Even during the festive days, the members of the Équipe were working tirelessly. Their diligence and always happy faces, even if there is an uncertainty or breakdown, were impressive. 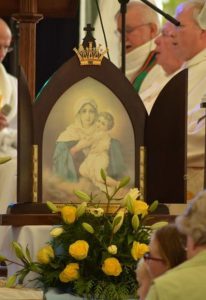 The flower decoration in the shrine and the floral arrangements in the festival tent speak for themselves: Three women meet with the Sisters of Mary to prepare the flower arrangements. They want to decorate the shrine in the future and now took the opportunity for a professional exchange. Many beautiful flowers – white lilies and yellow roses – were available. In good teamwork, large and small flower arrangements for the shrine, the festival tent, the outdoor altar, etc. were prepared — A happy and grateful togetherness!

This teamwork was not only in the preparation, but also during the festive days. Often the festival tent has to be converted for worship or afterwards for the pilgrims. The Le Traiteur, the French caterer, provided us with very tasty meals.

Many hands and a competent management made possible a carefree celebration for all pilgrims. Even children and babies were not missing while their fathers were working in the Équipe. Thus, this 100th anniversary of Josef Engling’s death has become even more for many “their” feast and the Blessed Mother has already won many hearts in France.

Also included was the French Marian Apostle Group. They sang their Marian Apostle song “C’est un beau lieu” – “This is a beautiful place”. On Saturday at the Youth Festival they prepared a small stand where they offered jams and walnuts. They also presented an appealing photo calendar for the coming year. Already twice the girls had the opportunity to make a pilgrimage to Schoenstatt. May their hearts catch fire for the mission of the Mother Thrice Admirable, Queen and Victress of Schoenstatt!

Of particular interest to the volunteers as well as the Schola of the cathedral was the learning of the Schoenstatt hymn “Protect us with your mantle”. The song was sung in French several times at the great Eucharistic celebrations.

The experiences in Cambrai, especially the walking along the death-way and the meeting with many people, have given me a greater closeness to Joseph Engling, as well as deep love and much joy. May Schoenstatt continue to grow in France – in the vastness and depth!