Congress community in the footsteps of Joseph Engling

After being able to experience September 15, 2018 and its surroundings in all its depth as representatives of our worldwide family, we were looking forward to the meeting with Joseph Engling on the 100th anniversary of his death. On October 4, early in the morning, we traveled as a congression community by bus to Cambrai. The trip was designed with impulses about stations in the life of Joseph Engling, with songs and prayer; but also time for personal reflection or conversation with the neighbor was planned.

Well prepared, we arrived in Cambrai and were happily welcomed by the two sisters, who had been there for a few days to help. Everywhere, under the direction of Abbé Jean-Marie Moura, priest at the shrine, eager helpers were preparing everything for the events today and throughout the weekend: in the festival tent, on the grounds, in the house, around the shrine. The Europa-Auxiliary was also in our midst with a small group from France and Belgium.

In the time before lunch or after, individuals or groups went to pray in the shrine or at the place of Joseph Engling‘s death in the nearby field, where a new large white cross marks the place. 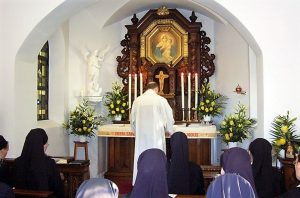 At 1.30 pm, Fr. Biberger was with us in the Shrine of Unity for Holy Mass.  In the sermon, he showed Joseph Engling as a model in regard to his personal ideal: his service and his great love of Mary.

Sacramentals of place and time 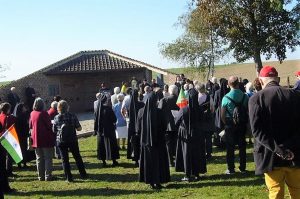 At 3.00 pm we went by bus to the cemetery in Eswars, where we let ourselves be taken into a very impressive statio about the last hours of Joseph Engling. To put ourselves back on the spot, and at the same time for about 100 years ago, was truly a touching experience and allowed us to experience the sacramental of place and time. The national flags, which many held in their hands, reminded us to follow all of this on behalf of our worldwide family.

In this intense climate, around 4:00 pm, we were expecting the other groups with whom we wanted to go on the death path together: a bus with Schoenstatt mothers from Swabia, pilgrims from Schoenstatt with representatives of various divisions, pilgrims from Cambrai and the surrounding area, Schoenstatt Fathers, priests and Marian Brothers … A multilingual introduction about the situation in this place 100 years ago took us all into this deep atmosphere. 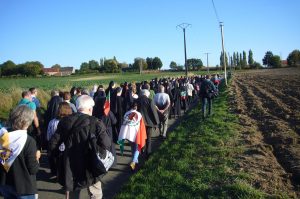 In a long procession, we walked the death-way,

led by the Europa-Auxiliary, which was alternately carried by the participants. On this final journey to the shrine, we took all the concerns of the Church and the world, our family, our Schoenstatt communities and our personal requests. In the alternation between short impulses from Joseph Engling’s life with suggestions to quiet reflection and the rosary prayed in different languages the approximately 180 participants went through the streets. Cambrai has probably never seen such an international crowd of Sisters of Mary.

Before the last crossroads, with a view to the place of Joseph’s death, A Brother of Mary, Mr. Amrhein very vividly explained the moving last moments in Joseph’s life, when the Blessed Mother accepted his offer of life for Schoenstatt. Again and again it became clear how much Joseph was connected with the dear MTA, with our father and the shrine and how calmly and well- prepared he went to his death.

“I am prepared and have everything in order”

These were some of his last words. In silence we went the rest of the way to the shrine.

There, meanwhile, the new Archbishop of Cambrai, Vincent Dollmann, many priests and pilgrims had arrived for the service at 6:00 pm. It was time for us to thank the Mother of God in the shrine and say goodbye because we had to start the journey home. On the way we had the opportunity to exchange echoes, to express our gratitude in international songs and to repeat again and again what our father said of Joseph Engling years ago:

“He is the living Founding Document and the lived founding history …

a Schoenstatt saint … our ‘big brother’”.