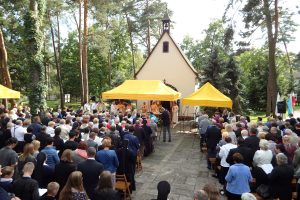 The day of the fiftieth anniversary of the death of our father and founder, Father Joseph Kentenich, fell this year for us within the Schoenstatt Trideum, to which every year in September the representatives of the Schoenstatt Family of Polish Dioceses gather. This year, these days had a special meaning, because as a Schoenstatt family in Poland we wanted to make the covenant of love with our father and founder. This event took place on September 15, 2018. The Schoenstatters in Poland have been preparing for this celebration all year long. For the participants of the Schoenstatt Trideum the presentations during this conference were the last immediate preparation. Also the new book of Sister M. Marcelina “Sketch of the pastoral way of Father Joseph Kentenich in today’s Polish areas” was a large contribution to this.

Covenant of Love with our Father and Founder

As often happens in such situations, we also experienced tests of our confidence, because on Friday afternoon it started to rain and it continued raining until Saturday around noon. It was planned that all celebrations should take place in the square near the shrine, near the statue of our father and founder.  It became more pleasant and during Holy Mass at 3:00 pm the weather was nice. Some pilgrims who only came to this celebration also had problems while driving. A bus with the pilgrims arrived at the end of Holy Mass because they met an accident on the way. In total, about 300 participants from different parts of Poland came to this celebration. In addition to the members of the movement, there were also representatives of the circles of the apostolate of the Pilgrim Mother.

After Mass there was a short break. Then the celebration began in which we wanted to make the covenant of love with our father and founder. As an introduction, we saw a PowerPoint presentation that showed us the history of the Schoenstatt Movement in Poland. A family handed over to the founder, who was among us in the sign of the statue, a basket of white and red flowers, the Polish national colors. Quotations in the words of Father Kentenich himself, which showed the meaning and importance of the covenant of love with him, led to the covenant of love. After the covenant we sang our beautiful “Te Deum” – “O Triune God, receive eternal praises”. 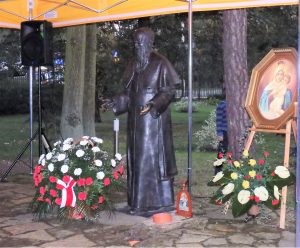 A covenant of love decree signed by all participants was placed in the foundation of the statue of our father and founder. At the end of the celebration, representatives of all communities of the Schoenstatt Movement which exist in Poland brought roses to the Mother of God in the shrine. The three youngest children brought a rose on behalf of the communities that will emerge in the future. All participants renewed teir covenant of love with the Blessed Mother.

After the final blessing there was a surprise. Suddenly Father Kentenich, an actor dressed as Father Kentenich, appeared in the square. He stood near the statue and distributed to all the souvenirs of this festival, a picture with the text of the Covenant of Love.

Afterwards everyone went to dinner and at the end of the day there was a happy evening with performances by representatives from all dioceses.

Bishop Romuald Kamiński, bishop of Warsaw-Prague, came for the Eucharistic celebration on Sunday. This day was the patronal feast of our shrine. In his sermon, the bishop compared our lives to a journey where things are not always easy; sometimes you have to go through great difficulties. However, it is important for us to trust God without limit.

After the Holy Mass, as every year, there were many attractions for adults and children – games, songs, dances, and food. An afternoon presentation was entitled “Choosing Fatherhood.” The entire program ended at 5:00 pm with Benediction in the shrine.

Members of the movement, acquaintances, neighbors and other “friends” of the Mother of God in our shrine participated in this day. It probably was just as many people as the day before and there were even more at a later celebration. There were many young families with children who had a nice Sunday afternoon together. The sunny weather was perfect for that. And for us it was a great way to familiarize all “pilgrims” with our shrine, with our dear MTA, and with our father and founder.