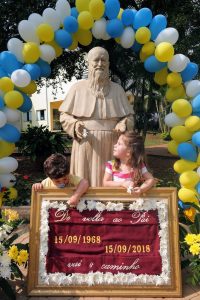 He continues his mission and works in the hearts!

Throughout the Kentenich year, we here in Brazil have prepared for the anniversary of our founder’s going home into eternity: we have made him known through prayers, texts, biographies, photos, videos, cards with his words, group lessons, lectures, meetings, through a competition: “Get to know and love him”, through newspaper articles and websites, in celebrations, holy Masses, dedication of statues … and in so many other initiatives. Finally in the last three days, a Trideum has been held all over the country, marking the anniversary day.

In many cathedrals – as in Bragança Paulista (São Paulo), Londrina and Jacarezinho (Paraná) – in parishes and sanctuaries this was a feast day! In Atibaia / São Paulo, the anniversary day began with a solemn thanksgiving Mass in the chapel of the Provincial House with the songs of the funeral Mass on September 20, 1968. The chapel was crowded with people from near and far, testifying to the fact that our founder was the “father of many nations”.   Coordinators of the Pilgrim Mother’s Campaign, who were at the Movement House for training days, and many pilgrims, visited the shrine all day long, greeting Father Kentenich in the image of the Father Statue.

At 3:00 pm there was another Mass for the pilgrims, parallel to that celebrated in the Cathedral of the Diocese of Bragança Paulista. This was preceded by a performance about the life of Father Kentenich. In Atibaia, the highlight of the day was the festive celebration in the pilgrim’s tent – with the same texts as in Schoenstatt. A special moment was the testimonies of a Sister of Mary, a young woman and a coordinator couple of the Campaign of the Pilgrim Mother.

Father Kentenich awaits you as his co-worker

In the Cathedral of Belo Horizonte, the Mass was celebrated by Bishop Otacílio de Lacerda, Auxiliary Bishop of the Archdiocese. After that, the crowd flocked to the shrine. More than 2,000 people took part in the celebration in Rio de Janeiro, led by Bishop Roberto Lopes OSB, Bishop Vicar for Consecrated Life Communities and New Communities and Archbishop Delegate for the Causes of Saints. He shared his positive impressions of what he had received from Father Kentenich on his visit to Schoenstatt and invited everyone to confide in Father Kentenich and faithfully follow his charisma: “You are the people that Father Kentenich needs as his co-workers to go into the world … In Dachau I could study the testimony of Father Kentenich, a man who knew how to master the most varied situations with wisdom, because – as is engraved on his tomb — he loved the church!”

A man who is ahead of his time

Also in Londrina, in our high school and in the “Mãe de Deus” theater, an audience of about 400 people was presented with a play entitled “A Letter of God.” It showed the story of a man who was ahead of his time, Joseph Kentenich. It showed how he was always able to master all the challenges of his time with his “ear at the heart of God and his hand on the pulse “. The artistic team used the multimedia resources and a great staging to keep the image of Father Kentenich in memory.

We are pleased and impressed to see that our father and founder was celebrated in so many places on the same day and was admired by cardinals, bishops, priests, civil authorities and various people who participated in the celebrations. Many people came to an “encounter” with him. As a pilgrim said, “I already knew Father Kentenich as the founder of the Schoenstatt Shrine, but now I know that I can count on his help even in my difficulties.” With great joy and gratitude we can say with conviction: Father Kentenich, your hour has come! Your life is a letter from God to us!

Some photos of the festivities: