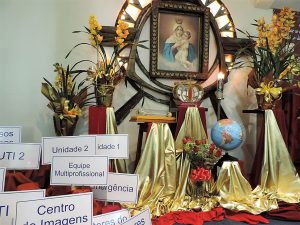 The power of love of the Queen

On the festive day, August 15, 2018, doctors, nurses, staff, patients, members of the board of directors gathered; there more than 350 people to celebrate the golden jubilee of the Coronation of the Blessed Mother. Her picture in the main entrance was crowned fifty years ago, on August 15, 1968, by Bishop Geraldo Fernandes, the local bishop, under the title “Mother and Victorious Queen in the Kingdom of Light”.

The celebration repeated itself several times during the day to allow the participation of many employees. In preparation for the celebration, all employees, patients, companions, and all comers could put their requests and concerns and contributions into the capital of grace. “To look to the Mother of God’s noble and beautiful face and to feel her motherly love is undoubtedly the greatest mercy I have received, for it is the power of this love that receives me, accompanies me and leads me ever more to Jesus, because our Mother does not keep anything for herself “, says Dafne Daniele dos Santos, assistant nurse of the surgical center.

During the ceremony, the names of the more than 25 hospital wards were placed on a plaque at the feet of the MTA asking for her blessings for all. After a common meditation on the meaning of the title and the mission of the Blessed Mother as the “Victorious Queen in the Kingdom of Light,” all renewed the coronation and prayed the same prayer as 50 years ago.

She is present and active

Everyone was invited to personally crown the Mother of God. Each participant received a picture of our Schoenstatt Mother and Queen and a sticker with the “Anniversary Crown”.

Sérgio de Oliveira Filho, a patient, affirms: “For us, the presence of Our Lady is a real reality that has helped me a lot and that I feel very connected with. She was a source of strength during my stay in the hospital, she gave me a lot. It helped me a great deal, so I went to the chapel to pray and received the prayer booklet and the crown for today, and I also prayed with Peter (the patient in the same room). “

With the crown, we ask the Queen to establish a kingdom of light in which life is protected from conception to death. It is all about a kingdom where life is celebrated, defended, nurtured, promoted, and prioritized, as the Gospel teaches, “I have come that all may have life and life in abundance” (John 10: 10). 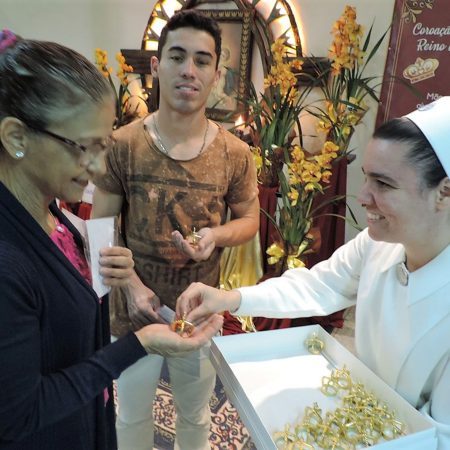 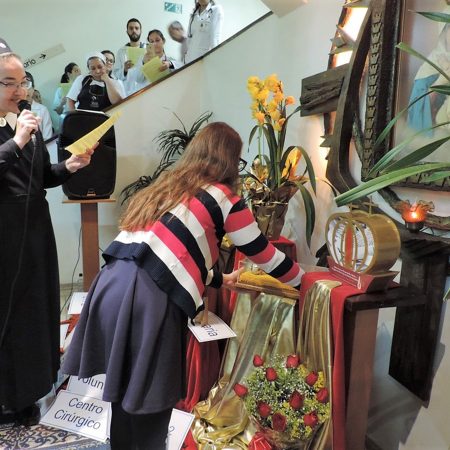 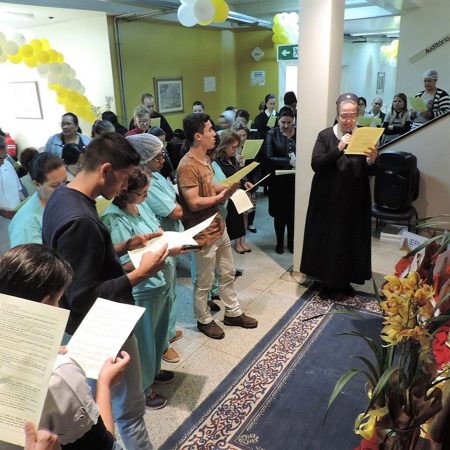 Since its founding in 1936, the Schoenstatt Sisters of Mary have been working in this hospital “Santa Casa” in Londrina. The small, original wooden hospital was expanded into a large complex of six units. Today there are three hospitals with six departments (Santa Casa de Londrina, Mater Dei Hospital, Sagrada Familia Children’s Hospital, Ambulatory Center, Diagnostic Center and Mater Ter Admirabilis Professional Education Center).

For the past 50 years, the Sisters of Mary have been involved in pastoral care, administration and nursing within the institution. In addition to health services, they coordinate and work in pastoral care. They carry out a pastoral “based on the guidelines of the Catholic Church and the spirituality of Father Josef Kentenich” (see: http://www.iscal.com.br/)

During a visit to the different areas we find everywhere a crucifix and the picture of the Mother Thrice Admirable and Queen of Schoenstatt.