50th anniversary of the Dedication of

the Adoration and Holy Trinity Church

A castle high above the Rhine – a “Castle of God” – celebrates the 50th anniversary of its dedication. For the festive service with Bishop Dr. med. Stephan Ackermann, Trier, more than 500 faithful and guests came to the Adoration and Holy Trinity Church on Mount Schoenstatt to be touched by the special atmosphere of this church. And there were “random pilgrims” who were on their way to Schoenstatt on June 9th,coming back after years. They all let themselves be taken into the joy of this day.

“We are ringing in the feast day,”

said the Vigil Celebration on the eve of the jubilee day. The bells of the Trinity Church invite all to celebrate the golden jubilee of the consecration of the church.

In the morning, small church flags flutter promisingly on Mount Schoenstatt and greet all those who are on their way:

District Administrator Alexander Saftig, local community politicians and members of religious communities in the region and beyond – from the Arenberg and Waldbreitbach, from the Pallottine Community and the Comboni missionaries – had come to celebrate this special day.

Exactly to the day 50 years ago, the then Bishop of Trier, Dr. Bernhard Stein, dedicated the Trinity Church on Mount Schoenstatt. “This church is one of the youngest churches in the diocese, but not the most insignificant,” said Bishop Ackermann, who celebrated this special day with over 500 faithful with a Pontifical Mass on Mount Schoenstatt. He said that the Adoration Church has become a special place for people from all over the world, far beyond the region.

The wonderful floral decorations of the church, the many priests who concelebrated, the music – “it was so solemn!” With these words a woman described the festive Mass, which included the vocal ensemble of the Schoenstatt Sisters of Mary.

It has become the house of God 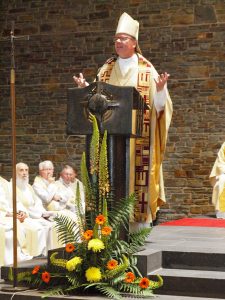 In his homily, Bishop Stephan drew a big curve: “Celebrating the church on this day, celebrating the jubilee, and, of course, taking a look at this room in a special way, I thought we cannot do this without placing this church of adoration and of the Holy Trinity in the context in which it stands with the other important places of prayer and worship of Schoenstatt.” He first directed our view to the small shrine in the valley, the “original cell” of Schoenstatt, to the picture of grace of the Mother Thrice Admirable, Queen and Victress of Schoenstatt and then the Pilgrim Church with its vastness and openness.

The Trinity Church on the mountain points to the goal of our lives, the Triune God, to whom we are traveling. Based on the external appearance of the church, Bishop Stephan emphasized that the image of the fortress of God reminds us of the heavenly city, which opens a spiritual space that conveys inner strength and security. God himself, “that is the center and remains the center.” The bishop continues: “Where we are strong inwardly by faith, there we can be open and free, without losing ourselves.

Thus we ourselves become a house of God according to the example and intercession of Mary.” The Bishop of Trier concluded his sermon with the invitation: “Let us give thanks for the testimony of Fr. Kentenich and for all those who live his charisma in the spirituality of Schoenstatt on this mountain, who carry it into this region so that it serves the church and humanity.”

Our church – a living experience of God

At the end of the Eucharistic celebration Dr. Bernd Biberger, Director General of the Sisters of Mary, invited all the worshipers to the Festive Ceremony in the Aula.
There the sisters explained why this church is special for them and for the entire Schoenstatt Movement: a sign of gratitude that commemorates the protection and special guidance of God and the Blessed Mother.

But it is also a symbol of Schoenstatt’s central concern: to bring God to the world in the truest sense of the word, like Mary. How that looks concretely became clear in a testimony of the youth communities. After a week of intensive missionary work in a parish, a young man says, “Going door-to-door, having adoration, I’ve seen that as something special … until now my faith was in my head, but now it’s reached my heart for the first time.”

The Adoration Church is also the place for people from all over the world to encounter Schoenstatt’s founder and visit his tomb. At the consecration of the church, no one could have foreseen that only three months later, Father Joseph Kentenich would celebrate his last Mass in this church on September 15 and immediately afterwards complete his life in what was at that time the sacristy. Here he found his final resting place.

The celebration shows in a few quick images how much this church has become a place of blessing and grace in 50 years.

In his greeting, District Administrator Dr. Alexander Saftig personally witnessed how he himself was gifted by this place. He summed up his good wishes and hopes that there will always be enough people to be inspired: “Believe me, society needs Schoenstatt!” 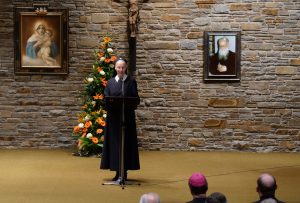 The President of the General Presidium of the Schoenstatt Work, Father Pablo Catoggio, explained the importance of this church as a special place for the whole international Schoenstatt movement. “One sees how the dear God does more than we imagine” – and with that, he thinks of the tomb of the founder in this church, which has become a spiritual center for the movement.

At the end of the festive hour, Sister M. Aleja, Superior General of the Sisters of Mary, thanked all the guests and the representatives of the Schoenstatt communities and invited them to linger on Berg Schoenstatt. Around the church there was a colorful program for young and old.

The concert of the Pfaffendorfer Turmbläser at lunchtime ensured a real fair atmosphere. Jubilee gingerbread hearts and raffles should not be missed. You definitely have a “win”, because in any case, a “good word from Father Kentenich” is always there. “There was a happy mood, this feast with the sisters,” said one visitor at the fair.

Church is worldwide and young

Various alternatives were offered inviting the people to linger on Berg Schoenstatt. The encounter with sisters from all over the world or a tour of the mission exhibition conveyed a flair of the universal church. A highlight was the summer concert in the Aula of the Adoration church with the choir and orchestra of the Schoenstatt Marienschule. In addition to an impressive musical experience, the people were also impressed by the students with the two music teachers. “The young people were so authentic, so impressive, very special,” was one echo.

It was Father Kentenich himself who gave the first impulse to build this church. There is also the opportunity to become more acquainted with this founder, to follow his footsteps on Mount Schoenstatt. To do so there were impressive film scenes, live testimonials, and the opportunity to follow in his footsteps which made one curious to learn even more about this great personality with a special charisma. It speaks for itself when the question is raised: “And where can you buy the DVD?”

In the middle of it all and very personally

In the middle of the fair there are oases of prayer and worship, the opportunity for the sacrament of reconciliation. There is also a Marian praise that seeks to capture the prayer tradition of the centuries and the universal love of the Blessed Mother in international Marian songs and that summarizes it all in an impressive rosary procession to the picture of grace. It is a special moment when each participant can bring a rose forward for a specific person, for a personal cause. “There was something about it all and I could just listen or join, just as it suited me.”

To experience the richness of spirituality

The jubilee day ends in “ONE HOUR BEFORE THE LORD“. Just like every month, in a specially designed time of Eucharistic Adoration, it is possible to bring before the Lord everything that moves the heart. Songs, silent moments, making requests, music, prayer together, feeling the closeness of God – it all becomes a deep experience and “made the richness of Schoenstatt’s spirituality an experience.”

A woman who came out of the church all alone in the evening formulated what moved her after that day: “I simply cannot leave this beautiful place”. 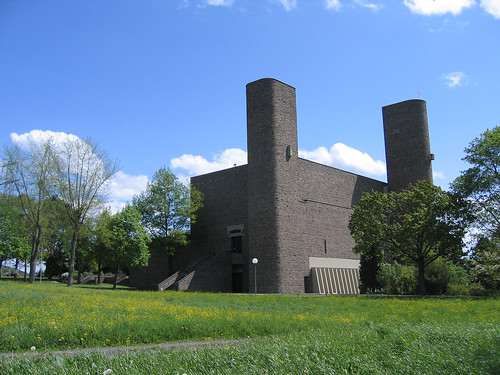