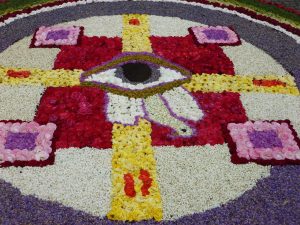 This is the motto of the Corpus Christi procession in Schoenstatt. More than 1,200 pilgrims came to Berg Schoenstatt on Sunday, June 3, 2018 to attend Holy Mass and participate in the procession. Numerous groups of pilgrims, such as the diocesan pilgrimages from Osnabrück and Eichstätt; a bus group from Wattendorf, Diocese Bamberg; from Marienfeld in Münsterland and from Heppenheim, Diocese Mainz, a group from France and one from Switzerland and numerous individual visitors found their way here and let themselves be touched and inspired by the atmosphere.

“Colony of Heaven” – This quotation from Father Joseph Kentenich’s greeting for the dedication of the Adoration Church fifty years ago was mentioned by the main celebrant, Fr. Bernd Biberger in his sermon. Just as in antiquity the colony orientated itself in its political and social life on the mother city from which it was founded, so it should be with us: The Schoenstatt family, indeed the whole Church should be an image of heaven. As we carry Christ through the streets on Corpus Christi, we express our willingness to make our communities a colony of heaven. In this respect Corpus Christi is also a political statement: It is an engagement for Christian values, that is: a commitment to the right to life for all people, especially the unborn, the children, the needy; but also a commitment to families, to the disadvantaged, to a more just and peaceful world.

At Corpus Christi we confess Christ, who is present in the Eucharistic Sacrament. Corpus Christi points to central truths of faith: to our redemption and to the mystery of the Trinity.

Each one of us is a Trinity Church

Next Saturday, June 9, we celebrate the fiftieth anniversary of our Trinity Church, which was purposely built as an adoration church, according to Fr. Biberger in his sermon. Through Baptism, the Triune God dwells in our hearts. From there he can rule the world and encounter the people. As the Blessed Mother carried her Son to the people even before he was born, so we too should bring Christ to the people so that they may meet him.

Numerous helpers collected flowers and formed them into elaborate floral carpets. These express in a special way the message of the Christian faith and the joy of it. This joy was also noticeable in the procession, which is accompanied musically by the Musikverein Niederwerth 1922.

Special attention was given to the children, who presented petitions at one of the altars and then spread flowers with a clear enthusiasm for Jesus. 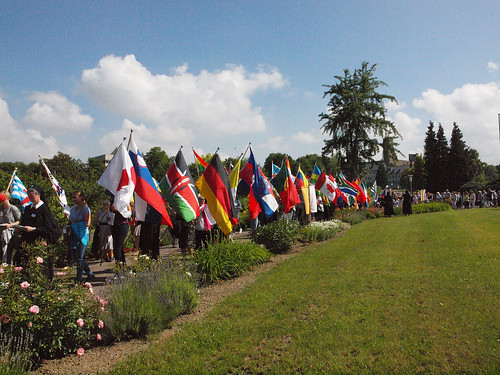 International as the worldwide Schoenstatt movement, so was also the procession. Numerous national flags from all continents were carried. Representatives of various nations prayed an “Ave Maria” in their mother tongue. Songs and verses in different languages ​​alternated.

In the afternoon, the numerous alternative offers were gladly accepted: viewing of the flower carpets, meditation in the shrine of the sisters, Eucharistic adoration, guided tours in the Father Kentenich House, “Life with profile”, opportunity for confession, adoration songs in the Adoration Church with the vocal ensemble of the Schoenstatt Sisters of Mary …

One participant lets us know: This has been my desire for a long time to experience Corpus Christi in Schoenstatt.- And now it has become reality!

Another said: I am here for the first time.- But I will come back next year and bring others!

A married couple told us: We have been here before and have now brought a friend and shown her a lot here.- We like to come here.

The members of a choir who spend a practice-weekend in the Marienland Educational Center on Mount Schoenstatt used the free time to look at the flower carpets. One participant reported enthusiastically: The others showed us photos. Although I’m not good on my feet at the moment, still on Saturday evening, I went with a few others over the mountain to look at the flower carpets myself. I also photographed them and sent them on.

A deacon, the person in charge of the diocesan pilgrimage from Osnabrück, wrote in his echo the following day: “It was absolutely outstanding and deeply impressive! That will continue to benefit people for a long time. “