With gratitude and joy in their hearts, they come to the shrine. They do not shy away from any distance, not the 1000 km in the area nor 4000 km from the west of Australia.

„Mother, your shrine is a home for all.”

To say thank you for this spiritual home in the shrine of the Mother Thrice Admirable of Schoenstatt, the approximately 2,000 pilgrims are urged to make their way to the formerly unknown Mulgoa, to the “smallest church”, as the shrine is often described by tour guides. And they are all richly rewarded on this brilliant autumn day.

In a video presentation, the pilgrims can absorb the history of the shrine. With joy and admiration, they give thanks for everything great that has grown from the smallest inconspicuous beginnings to the present.

Together with two bishops and many priests, Archbishop Anthony Fisher of Sydney celebrates Holy Mass. 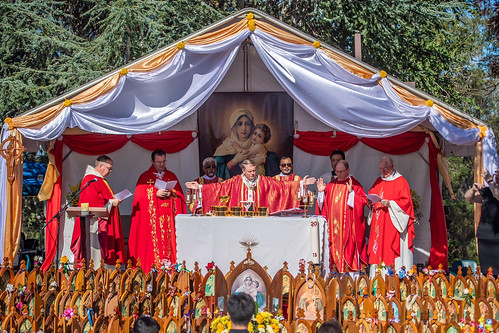 “I am grateful for Schoenstatt’s far-reaching influence,” said Archbishop Fisher in his welcoming address to all. The prophetic words of Cardinal Gilroy at the inauguration of the chapel fifty years ago have come true, the archbishop emphasizes: the shrine has become a precious jewel of significant influence in this half-century.

In his homily about Mary, Mother of the Church, whose feast is officially celebrated on Pentecost Monday for the first time in the Church, he said: “From now on we are all Schoenstatters, at least once a year!” For the Covenant of Love with Mary the Mother of the Church, call us again and again to work for the Church. “We need our Mother Mary, her intercession at this critical moment of our church and nation, her example, her advice.”
With thanks to God on this Golden Jubilee and the birthday wish Ad Multos Annos closes the sermon.

In the midst of 50 golden balloons, an artistically designed birthday cake in front of the chapel is ready to be cut by the archbishop. Joy and thanks rise to the clear sky with the balloons over the shrine.