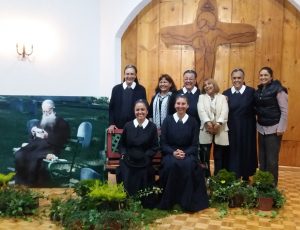 The Schoenstatt Family in Chile has planned a variety of events for the 50th anniversary of the death of Father Joseph Kentenich. At the shrine in Montahue, Concepción, there are eight encounters entitled “On Monday Evenings,” using Father Kentenich’s meetings with married couples in Milwaukee as a guide. A team led by Sister M. Fernanda prepares these evenings.

The first “On Monday Evenings” encounter was on March 19th. A large photograph of Father Kentenich on the bench in Calvary Cemetery in Milwaukee made the founder present and created a family atmosphere, as in his lifetime.

The idea is that the richness of the life exchange between Father Kentenich and the families should come to life again. Sister M. Fernanda presented the great themes of these encounters, which are in connection with everyday life. Lay people and Sisters of Mary shared their experiences with Father Kentenich and his Marian, fatherly, and pedagogical charism, which is so relevant today.

The initiative would like to bring people closer to Father Kentenich,

that many may see him as an exemplary priest, a priest who became the “transparency of God the Father.” All those who are associated with the shrine and the MTA should also develop a personal bond with him and receive from him what he gave more than 50 years ago.

Holy people like Father Kentenich are also close to us from eternity with their intercession. A young leader of the Schoenstatt “Pioneros” (young men aged 13-17) testified that he experienced Father Kentenich alive in his life and in his task as leader. He maintains an inner and personal dialogue with him.

A young woman who participated in the “Schoenstattzeit” program gave her testimony of how the dialogues she had with Father Kentenich at his tomb were decisive for her future life.

Thus, the first meeting of the Schoenstatt Family in Montahue, Concepción, was an important event for the 120 participants. Now they are preparing the invitations to address more people for the upcoming encounters. 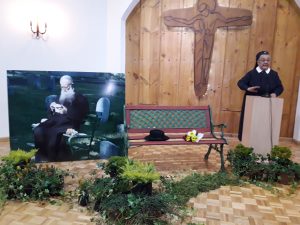 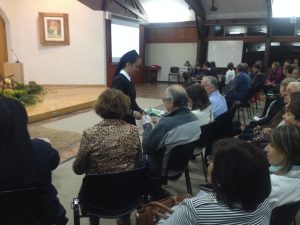