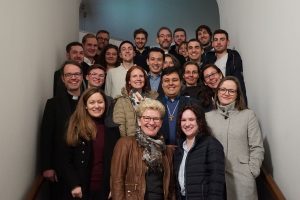 For the third time, representatives of various spiritual communities were invited to a networking meeting from February 23-25, 2018, in the seminary in Fulda to discuss work with youth and young adults and to strengthen each other.

There were 22 of us participating from different communities: Emmanuel, Charismatic Renewal, Nightfever, Totus Tuus, Regnum Christi, Koinonia John the Baptist, Schoenstatt, and others. There were also very new initiatives, such as two groups that have their origin in Poland, a prayer group called “Eagle” and the community called “Light, Life,” or the community Shalom, a Brazilian movement that has existed only for 35 years. Throughout our meeting, we held Eucharistic adoration, even during the thematic sessions, as well as at night.

Right at the beginning, Paul Metzlaff told something nice about the press conference on the Youth Synod that had taken place one week before. The two German representatives of the Pre-synod, Thomas Adonie, National Chairman of the BDKJ, and Magdalena Hartmann, Schoenstatter, were there. Magdalena was asked the question: What makes veneration of the Blessed Mother so contemporary today? She answered very beautifully and personally how Mary is a role model for her, how Mary helps to bring together faith and everyday life. Afterwards, journalists came in and thanked them for their response: “I have never heard anyone speak so beautifully about Mary as this young woman.”

My Heart is Burning for Mary

On the first evening everyone was supposed to introduce themselves and say what their heart is burning for. “I am Sister Anrika, Schoenstatt Sister of Mary, and my heart is burning for Mary,” I began. “And my heart burns for Mary to work in the Church, for where she is, the Holy Spirit acts; she is his vessel and his tool.” The woman who sat next to me and belongs to the Totus Tuus community took up the idea and said that her heart burned for Mary as well. She told me afterward that she was in this circle for the first time and did not know if she could speak of Mary, but the previous answer had encouraged her.

The next day we heard three lectures:

The first was on the theme of the Youth Synod by Father Joao Chagas of the Shalom community. He works in Rome in the dicastery for the laity, family, and life. Father Alexandre Awi Mello is his direct superior.

From Rome to Fulda

Father Chagas said he was very happy to come from Rome to Fulda. His talk and the conversation with him were in English, but he spoke so easily that you could follow well. His words impressed me. “He spoke directly to the heart,” someone said after the lecture. Among other things, Father Chagas mentioned the importance of spiritual communities for youth ministry. They are the Holy Spirit’s response to the changing situation in the Church. You can see that there are many new revivals and the Church does not die – even if statistics often calculate that. But we should prove that they are not right.

He said the new evangelization comes from the “poor in spirit” – that was a deeply Marian attitude. He drew our attention to the writings of Pope Francis for each of the World Youth Days – including the national ones. They are always trilogies: In the three years before the WYD in Krakow it was about the beatitudes. Now before Panama, there are always Marian themes. It would be worthwhile to follow this.

Calling to Holiness and Evangelization

The next lecture of Bishop Genn from Münster was more like a chat. His theme was “Calling to Holiness and Evangelization.” First, he collected our questions about it. He then answered these in conversation and said some basic things, for example, that holiness would show itself in love. Saints show us how to be Christians. Holiness means remaining in the Lord until he comes again.

The third speaker was the Jesuit priest Clemens Blattert, who presented his “future workshop.” The rooms of the “future workshop” are located on the grounds of the Sankt Georgen Philosophical-Theological University in Frankfurt. For a few years, Father Blattert has been offering weekends, retreats, and one-on-one guidance for young people. There are 7-8 spots available and they are always full.

Subsequently, there was an exchange of best practice experiences for youth ministry from each community. The day ended with a very impressive evening prayer and the calling down of the Holy Spirit upon each of the communities present.

With a holy Mass at the Fulda cathedral and a closing summary of our exchange, we said goodbye to each other on Sunday – aware of being on the road together and of actively accompanying the process of the Youth Synod.