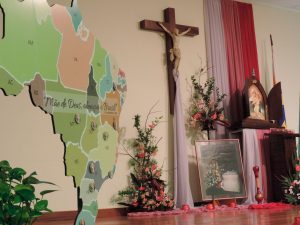 “In the shadow of the shrine, the fate of the Church will be co-determined!”

These words of our founder, Father Joseph Kentenich, became reality at the meeting of the diocesan coordinators of the Schoenstatt Pilgrim Mother Campaign. From 44 dioceses, from the north to the south of Brazil, they came to the Shrine of the Permanent Presence of the Father in Atibaia, State of São Paulo.

At the beginning of March, the coordinators exchanged their experiences in the shadow of the shrine. They received impulses and pondered concrete steps in this Joseph Kentenich Year to help make our homeland a holy Marian land: “Fifty years after the death of Father Kentenich, the work should continue with the same fruitfulness as at the beginning, and today this task is laid upon the shoulders of every Schoenstatt child … It depends on the coordinators, so that many families can draw from the teachings of Father Kentenich. In this way, we will help many families to become a new Marian land.” With these words, Sister M. Gislaine Lourenço, the responsible director for the Secretariat of the Pilgrim Mother, gave the coordinators their task.

The Mother and Queen is Very Popular in Brazil

Despite the political corruption in Brazil, the Catholic Church has a great influence on society. The Schoenstatt Movement works with the Church, and there are more than three million families who receive the Schoenstatt Pilgrim Mother in their home. Millions of Brazilians have a great love for the Mother Thrice Admirable, Queen, and Victress of Schoenstatt – Mother and Queen, as she is known among them. The families receive the graces of the shrine and they come into contact with the spirituality of Father Joseph Kentenich.

This year is devoted to the mission of the laity in our homeland. The families use the opportunity to make our spirituality known through writings with the theme: “Salt of the earth and light of the world for a new Marian land!” The topics motivate people to work for social transformation through self-education, to concrete actions for the good of others, and trust that the covenant of love has the power to create a new culture.

Know and Acknowledge the Charism of Father Kentenich

The example of Father Kentenich’s trust motivates the people to live a life out of the covenant of love. Therefore, the coordinators and missionaries of the pilgrim shrine say: “We do not want to work only for the Church to recognize the sanctity of Father Kentenich. We want to work for the recognition of Father Kentenich’s mission and charisma in order to help create a new Marian world. This charism can help the Church to renew the world,” explains Sister M. Gislaine.
Rita de Cássia R. da Silva accompanies the work of the Pilgrim Mother in the archdiocesan seminary and ministries in Brasília, the capital of Brazil in the Federal District. She believes: “Despite the difficult current situation in our country, we uphold hope and faith in the efficacy of the Blessed Mother. We trust in the graces that she distributes from the shrine for the conversion of our homeland.”