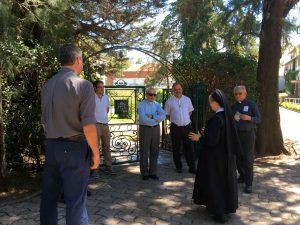 The Father House is a meeting place

that will enable a meeting with the person, the mission and the charisma of Father Kentenich. It was inaugurated in October 2015. Since that time, almost 7,000 people from various countries such as Bolivia, Brazil, Chile, Costa Rica, Germany, Ecuador, Paraguay, Puerto Rico Spain, Uruguay, and the USA have visited here.

This year the Schoenstatt Fathers of the “Regio del Plata” (Argentina, Uruguay, and Paraguay)

visited the Father House in New Schoenstatt during the annual meeting of their community.

On February 15, a group of Schoenstatt Fathers visited the Father House. We were warmly greeted by Sister María Julia in the front yard.  She is the person responsible for the Father House, the founder encounter place at the National Shrine of Argentina. We started with a tour. If you look at the house, you are surprised by the excellent interior and exterior renovation. The stone slabs by the photo panels that remind us of the places where Father Kentenich was, are very impressive.

After an initial introduction, we split into two groups. I myself was with the group led by Sister M. Georgina. It was very impressive for me to experience with what freshness she spoke about our father and founder. It was clear that she was reporting on historical events that she had heard from others and made her own. She reminded us of the time when the property was to be bought, of our father’s personal efforts to help the sisters by saving money and handing it over to build the shrine, etc.

As we walked along the path, we slowly went towards the cemetery. Several of us were very impressed by the large number of graves of the deceased sisters. Some of these sisters are especially appreciated by the Fathers.

After this tour we came back to the Father House, where we were already expected by Sister María Julia. She invited us to come into the house, but left it up to each one to do what he wanted, so that each of the Fathers could linger where his soul was most touched.
I found the combination of multimedia offered in the Father House particularly good. It is really outstanding, with the latest technology of the 21st century, which illuminates both the person of our father and founder, as well as the time in which he lived.

The carefully selected texts, the photos from that period, the objects used by the founder, the good lighting that enhances the exhibits, the design of the walls, and the variety of ways in which the information is presented, have been so successfully integrated that you can see the various stages without becoming tired. The design of the timetable seemed to me particularly outstanding.
Sister María Julia stayed in the background, but was always ready to answer any questions that might arise. With small anecdotes she started lively dialogues and invited us to exchange views. She even provided a glass of water and small sweets which were particularly welcome on a pilgrimage to the Father House and were consumed very quickly.
The house is magnificent. It allows an encounter with the story of our father. It is a “museum” that wants to keep this story alive in us.

Congratulations to everyone involved in the design and realization of this wonderful project. 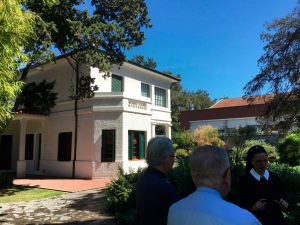 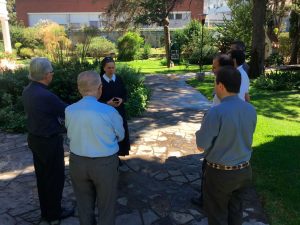