There was great anticipation before the feast day, March 18, 2018, for the five novices from Germany, Austria, Hungary, and the Philippines; their relatives; the Schoenstatt Sisters of Mary; and all those who wanted to experience this day.

Vigil the Night Before

This was already expressed by the vigil celebration the night before in the auditorium of the Adoration Church. About 500 people accepted the invitation of the Schoenstatt Girls and Young Women in Germany, who prepared the evening. Through a presentation we got to know the novices, and some questions were answered:

“The interviews were great,” commented young people. They felt particularly addressed by the personal experiences of the novices. Original contributions from young people and reception guests gave the evening a happy, family-like character and increased the anticipation.

On Sunday morning there was a light blanket of snow on Mount Schoenstatt. The dream of one novice came true! With festive bells ringing, the novices went in procession to the Adoration Church in their white wedding dresses, accompanied by many banners.

All eyes were on the novices as they entered the church, which was filled to the last seat. Many other guests could attend the celebration in the auditorium via live broadcast. The vocal ensemble of the Schoenstatt Sisters of Mary, a youth choir, and a group from Hungary provided the music for the festive holy Mass. Father Bernd Biberger, general director of the Schoenstatt Sisters of Mary, warmly welcomed all those present. In his sermon he took up the first reading of this Sunday: It points us to the mystery of the covenant that God made with us human beings, and which becomes concrete in Schoenstatt for us in the covenant of love with the Blessed Mother.

This motto which the novices chose for their reception was taken up by Father Biberger.

God himself spoke those words many centuries ago to his people Israel, but they are also true for us today. He called the novices by name and invited them to follow Christ. Anyone who is called by name is asked to give an answer. The novices responded to his call by giving themselves away completely. From today on, they bear the name of the Blessed Virgin Mary and wear the Marian dress of a sister. They express that, like the Blessed Mother, they want to be given away to God, open themselves to his guidance, and make themselves available to him. In this way they help people even today to encounter Christ and experience God in their lives.

Then followed the moment eagerly awaited by many. Being called by name became concrete: Sister M. Aleja Slaughter, general superior of the Schoenstatt Sisters of Mary, read the future sisters’ names chosen by the novices:

After the common prayer to the Holy Spirit and the Litany of Loreto, the novices asked for the dress of the Schoenstatt Sisters of Mary and then knelt in front of the altar.

Father Biberger presented to each individual

Together, the novices left the church, and the congregation could allow the experience to resound in their soul, accompanied by songs and a prayer of thanksgiving. 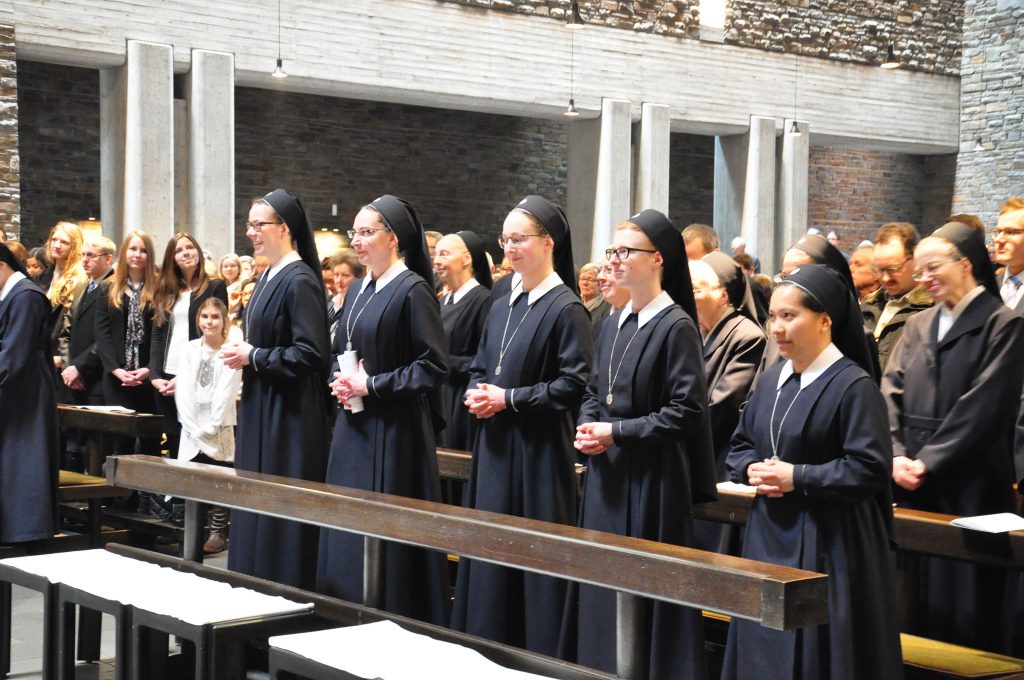 When the Magnificat resounded, the eyes turned to the central aisle: Full of joy and also with emotion, we saw the novices for the first time in their sister’s dress, radiant with joy! They returned to their seats, and the holy Mass continued. Like the readings, the petitions were also read by guests of the novices.

After this impressive, festive holy Mass, the novices prayed their thanksgiving at the resting place of the founder of Schoenstatt, Father Kentenich. Then the parents, siblings, and guests congratulated them in the auditorium – and with that the family-like and happy celebration with their relatives began.

Encounters in the Afternoon

Throughout the day you could hear many positive echoes:

As on the preceding day, that afternoon there was also an extensive alternative program with an insight into the life and mission of the Schoenstatt Sisters of Mary, information about the life of Father Kentenich, as well as answers to the question, “What is Schoenstatt?” People made good use of these offers, and many of the guests were happy as they ended the day here at the place of grace. 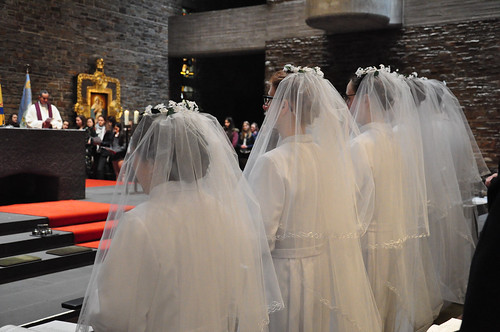