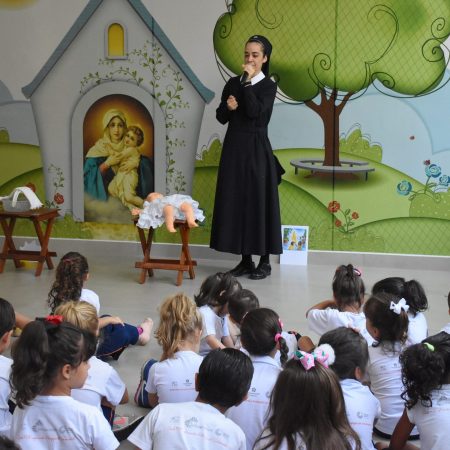 A climate of expectation and of joy reigned in the “Mãe de Deus” School of the Schoenstatt Sisters of Mary in Londrina, State of Parana, Brazil.
On the 5th of February, the first day of school, the students were surprised with new, remodeled classrooms. One could see in the eyes of the more than 600 students how excited they were to meet their new friends and teachers. The first day of school began as usual with a prayer.

This was followed by announcements about what was new. The head of the school, Sister Rosa Maria Ruthes, welcomed the students and parents. She mentioned the memorial year for Father Joseph Kentenich in which the Mãe de Deus School, together with the Apostolic Movement of Schoenstatt in the whole world, will commemorate the 50th anniversary of the death of the founder. In order to emphasize this jubilee year, the school’s pastoral team, in connection with the religion classes, have planned various activities, as for example, plays, historical quizzes, and outings for the entire school.

Mary is Present in the Classrooms

After this the parents and students could view with satisfaction and joy the improvements on the school premises. Not only the architecture pleased them, but also the fact that in each classroom there was a home shrine with a picture of the Blessed Mother. One 8th grade student said, “The presence of Mary in the classroom is very important because SHE helps us to ask pardon when we have had a fight with our friends (classmates).”

Knowledge and Faith in the Service of Others

As a denominational Catholic school which orients itself on Schoenstatt’s pedagogy, the Mãe de Deus School unites quality lessons with spiritual and human connections and offers an integral education which includes all aspects of the human person. Through activities in the community – solidarity in experience and action – the students learn that they must transfer faith into concrete works in daily life, and that knowledge gained by studying must stand in the service of others.

An example of this is that during Lent a few students want to be “Promoters of Peace” in that they want to practice a personal resolution of self-education. Besides this they practice what they call “Mass of Heroic Youth.” They want to come to school earlier in order to participate together at the celebration of the Eucharist before classes begin. A few parents support them in that they also attend this holy Mass with the students. In this way Schoenstatt’s pedagogy helps to form “the new person in the new community” as Father Kentenich had desired. 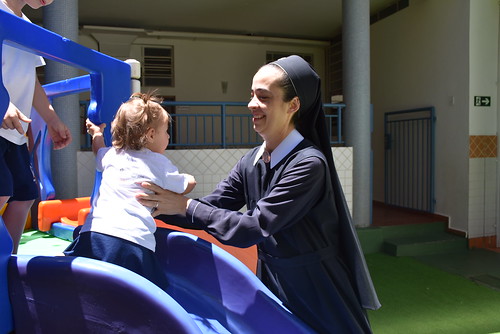