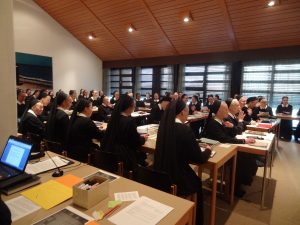 From January 15 to 22 about 70 sisters from the so-called Dynamic Province met for their yearly schooling and community week.
On December 8, 1966 this province was constituted. All the sisters who work for the Movement were gathered together into this province.

Soon after the founding of the Sisters of Mary Father Kentenich recognized that the community could not achieve both goals at the same time: to be effective as Secular Institute in various professions and at the same time be professionally at the disposal in an inspirational capacity for the growing Schoenstatt Movement. Thus already in the 1930s he began to free sisters for the work in the Schoenstatt Movement. He himself educated them and then finally gathered them together into their own legal formation, into a province.

The 50 year jubilee of their foundation was celebrated in 2016 together with the leadership of the Schoenstatt communities. At this “Family Feast in a Great Frame” the joy in our common vocation to Schoenstatt was evident.

The Schooling Week 2018 still stood totally in the glow of this feast and this glow became even greater through the re-living of the Feastday in words and pictures. With the memories of this beautiful jubilee day however there was also united the question: which path to take into the next 50 years in order to carry the mission of Schoenstatt into the future.

Therefore we concentrated in this week on a very tangible theme for our schooling: Into the world of the new media and our dealing with it.

At the beginning there was a “Tour through the digital space”. Above all there was presented the change in communication through social networking.

After that there were three days of processing-work according to the method our founder: observation, comparison, synthesis, application. In a very open exchange we gathered our observations about dealing with the media, drew comparisons, and tried to synthesize this in principles. That is a really strenuous work which demanded full concentration, but also became a gift to us.

We gratefully experienced that the spirituality of Schoenstatt can help us when dealing with the digital world. Many words of our founder gave us a directive for this. Although they were spoken decades ago, they are applicable today because they deal with fundamental declarations.

Naturally we could not finish this work in three days, but we have laid a good foundation for the next steps.

With such concentrated work, we could not fail to also have some recreation.  We had this in common singing and playing games, in informal discussions and also in times of quiet and of prayer.

On the way into digital space in a very real way

At the end of these days we once again agreed how good and necessary these common schooling days are for us – also so that with this, we can go our way into digital space in a very real way.