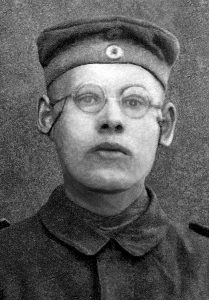 All things to all men

Killed in action on October 4, 1918 at Cambrai in France.

Joseph was a pupil and student in Schoenstatt, Sodalist and Prefect in the Marian Congregation in Schoenstatt, a soldier in the First World War serving in Russia and France.

His beatification process was initiated in 1952; on June 17, 2008 was the diocesan conclusion of the supplementary process in Trier, and on September 24, 2008, the files were handed over in Rome.

Joseph Engling came to Schoenstatt from East Prussia in 1912 as a missionary student. He was sent to the front in Russia during the First World War, and shortly before the end of the war he was killed in action on the western front at Cambrai. He sent the Iron Cross, which he received for his extraordinary dedication to his comrades, to Schoenstatt for the Blessed Mother in the Shrine.

“Saint of Reconciliation,” is a title given to him; He is presented at the celebrations for the conclusion of his diocesan beatification process in Trier as “Saint of Vocations”.

Following in the footsteps of this twenty-year-old infantry soldier, young people have been enthused for over ninety years for a radical, ever original and generous commitment to the kingdom of God, for the mission of the MTA, the Mother Thrice Admirable of Schoenstatt.

Josef became a model, the “big brother”. He has drawn the first traces in the Schoenstatt Holiness School. He discovered his Personal Ideal “All things to all men and Mary’s own.” He experimented under the wartime conditions with the daily routine of his Particular Examination and his spiritual daily order as a path to holiness, to the realization of his ideal. He offered the sacrifice of his life to the Blessed Mother, his “Dear Little Mother,” while the grenades exploded around him: “I am yours. Dispose of me and what is mine, just as you like. But if it agrees with your plans, let me be a sacrifice for the tasks you have given our congregation “(1918).

His offer of life to the Blessed Mother was later referred to by the many who followed in his footsteps on the path of holiness. Joseph himself did not have a role model – only his spiritual director. “I want to become holy through my spiritual director!” That was the secret of his holiness.

God led this boy from distant Ermland to Schoenstatt on the Rhine during these years when the founder struggled to proclaim the covenant of love with the Blessed Mother to the young people. At the beginning of Schoenstatt history, the Blessed Mother placed at the side of the founder,  a young man who had the ability to take in the ideas presented and to constantly adopt and consistently and purposefully put them into action. 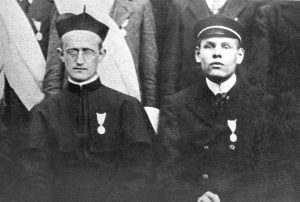 At the age of fourteen, Joseph came to Schoenstatt to the Pallottine House of Studies. The goals of the young Congregation, which had been founded in April, fell in his soul on ready ground. Every seed which was distributed in the weekly lectures of Fr. J. Kentenich, brought rich fruit to Joseph – completely in silence, but under the most attentive and vigilant gaze of the Spiritual Director who testified about him: “It is not an exaggeration when I say: hardly a single deeper suggestion of mine has gone down with him. Head and heart have preserved them all with great faithfulness “(J. K. 1957).

With some amazement, Fr. J. Kentenich saw how independently spiritual life unfolded in Joseph; that with him, in fact, the “great war became a powerful aid to self-sanctification” (see Founding Document). Joseph became a pathfinder for the Schoenstatt educational system. “That was part of the specific peculiarity of his spirituality: connection of the highest ideals with the smallest things of everyday life. He has brought this to an admirable mastery, which saved him from becoming a fanatic and a dreamer, but also helped him in everyday life and, in everyday life, not to become ‘everyday’ or break down. “(J. K. 1957).

Thus, in the grueling war at the front, his inner life matured into the perpetual presence and nearness of God. “God, the loving Father, is with me”. He was ready and said goodbye to his comrade: “I am prepared and have everything in order!”

The consecration of Joseph at the conclusion of the month of May 1918 included the offer of his life “for the task which you have given to our Congregation.”  This was the highest form of the Covenant of Love with the Blessed Mother of Schoenstatt and went down in history under the name “Joseph Engling Consecration”. It is astonishing that at all times, at home and abroad; Schoenstatters expressly followed Joseph, allowing themselves to be carried along by his example, by his devotion as they pursue their own original vocation and holiness: “I want to become a second Josef Engling” is the principle of many “Schoenstatt saints”, but without wanting to copy him.

In close connection to the Blessed Mother in the Shrine and to the spiritual Father, the original spirituality of Schoenstatt unfolded in him as a covenant spirituality, an instrument spirituality and an everyday sanctity, as it was only reflexively named years later. “He is and remains for us the great divine design at the beginning of our family history: the ideal for the man of one great thought and one great love” (J. K. 1957).

When Father J. Kentenich received the news of his death, he knew that the young foundation had passed the first fiery test: at its beginning, not four years after October 18, 1914, it had a saint. In his short life, Joseph exemplified what was slowly developing in Schoenstatt for decades. “Thus, Joseph Engling may have been the only one who anticipated in his person the whole development. Later, the expression was born: Joseph Engling’s life story is the anticipated story of the whole family “(J. K. 1965). Based on this conviction, Fr. J. Kentenich published a first biography of Joseph Engling in the magazine MTA.

Regarding the importance of his own person for Joseph Engling, Fr. J. Kentenich gives an account of only one occasion, in a study in 1957: “For him, his personal attachment to the head of his family, to his spiritual director, to his spiritual leader and to the founder of the work, became decisive. The fertility of this personal bond in Joseph’s life can be aptly described with the phrase ‘life transmission’. ”

On the fiftieth anniversary of Josef Engling’s death on October 4, 1968, Father J. Kentenich had prepared a handwritten address for the Schoenstatt Family. Beyond his own death, he reaffirmed his conviction: “In the story of the young hero, it (the Schoenstatt family) experienced the pre-existing Founding Document and founding history with the three contact points in exemplary perfection. … God, as it seems, unambiguously expressed his intention. If not mistaken, he has provided this for the honor of the altars. ”