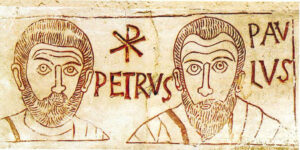 What does this feast day tell us today?

We could answer in a variety of ways. Peter is the first to confess Jesus as the Messiah and Son of God (Mt 16:16), which is why he was appointed leader of the early church, the rock on which Christ built his church.

Paul, “one of the greatest of the great who has already entered the stage of this world”[1]; ardent missionary, apostle of nations!

If we look at their life stories from a purely human perspective, we encounter the visible fragility of the Church of Christ: holy and sinful. Both have sinned badly. One publicly and ceremoniously betrayed Jesus, the other publicly persecuted him. But “these are the chosen men to whom the crucified one entrusts his mission”.[2]

The great and fruitful work of the two apostles in the service of evangelization is not based on a spiritual message, but on a deeply experienced encounter with Jesus, whose formative power was so strong and lively that it led to the radicalism of love in the following of Christ.

Today’s festival reveals on the one hand the infinite mercy of God and his undeserved choice of grace; on the other hand the free response of man on which God makes himself dependent in love.

The sense of justice often leads us to forget, when assessing our and other people’s abilities, the view of the message received that “God does great work only through the smallest” (J. Kentenich). God does not choose the most capable, but those who are willing to be complemented so that he can enrich and empower them. God chooses those He wants and entrusts the mission He wants to everyone.

God chooses who He wants

In a letter to Joseph Engling, a member of the Marian Congregation from the first generation of Schoenstatt, Father Joseph Kentenich advised: “You must first speak theoretically and practically from the bottom of your heart: ‘Ecce Ancilla Domini’ and only then does the hymn of joy follow: ‘Et exaltavit humiles’ “. Because it is precisely in human weakness that God can reveal his strength and power (cf. 2 Cor 12.9).

It is said that “the power of a disciple corresponds to the power of his faith” because “it is faith that opens us to grace”[1].

Peter was the first to confess faith in Jesus as the Son of God. Paul confirms the same belief in his final encounter with the Risen One and his radical conversion to Jesus:

“Here we see the realization of the great basic law of the kingdom of God. God has great plans, full of mercy and grace, but He will not be able to fulfill them if there are no people who say yes with all their hearts. When God began the plan of salvation, he made it dependent on the yes of the Blessed Mother. Fiat mihi secundum verbum tuum! Only after this happy yes has been said does it happen: Et Verbum caro factum est! God has become man! ”

Today’s festival invites us to renew our love for Christ and his Church. Peter, who was captured and executed in the Vatican, is forever present there, not only with his grave, but also with his mission. All of his successors up to today’s Pope are “the rock” on which the Church of Christ is built.

Despite the human weaknesses of this church, our belief confesses that “the gates of hell will not overcome them” (Mt 16:18). That is why we want to renew our faith today. We want to testify with our life the inscription on the grave of the founder of the international Schoenstatt Work: Dilexit Ecclesiam! Yes, we love Christ and the Church founded by him and led by the Holy Spirit through Peter’s followers, as well as all bishops and priests. We recognize that all of them, as in Jesus’ lifetime, are called from the world and full of limitations, but are chosen in the power of faith and grace to lead the Church into the future.

The Church lives because God is its reason …

The God-with-us, the God who reveals his love on the cross. If the disciple experiences this love of Christ in its final consequence, he must show him an equal love: “I will follow you wherever you go (Luke 9.57)”.

May the Holy Spirit open us to grace to live according to the gifts given to us in baptism and to respond freely to the love of Him who first loved us and gave himself up for us: you are Christ the Son of the living God! (Mt 16:16).