With YOU We Go into the Future!

Shrine reaches over a million people. The apostolate is part of the international Schoenstatt Movement, which with its more than 20 communities and groupings, brings God to the world today as the Blessed Mother did, and does so in a covenant of love with her.

A bit of our everyday culture is infused with the Gospel

Bishop Wolfgang Ipolt from the Diocese of Goerlitz came to Schoenstatt, Germany to celebrate this anniversary because he sees in this apostolate a contribution to the new evangelization. “With the Pilgrim MTA Shrine apostolate, a bit of our everyday culture is infused with the Gospel,” the bishop told the 800 or so faithful. “There is no such thing as a faithless or even godless place.” This  shrine, as it is brought into people’s everyday spaces is “a visible reminder that the Lord wants to be encountered and witnessed by us everywhere,” something that was experienced in this celebration in many ways. 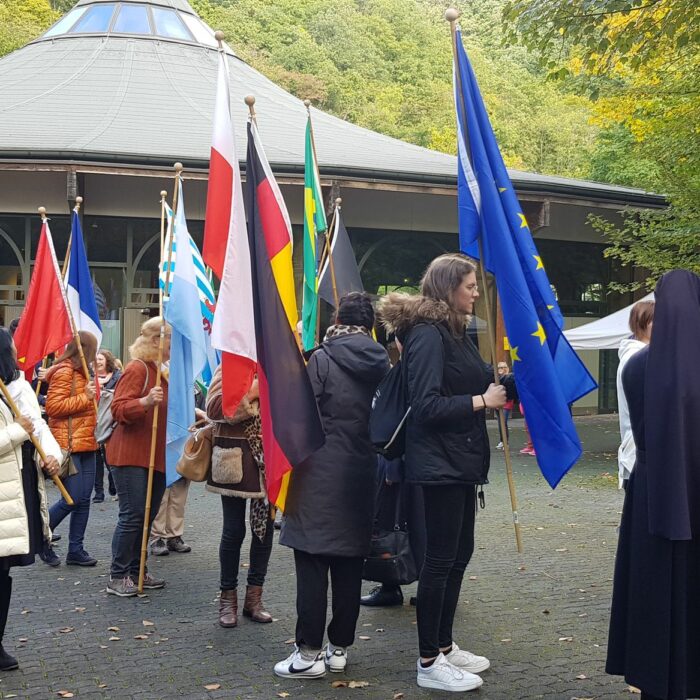 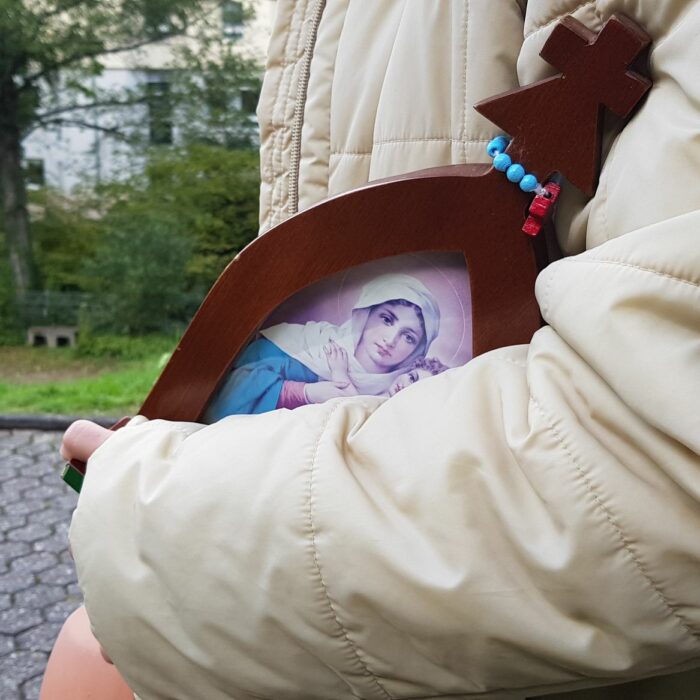 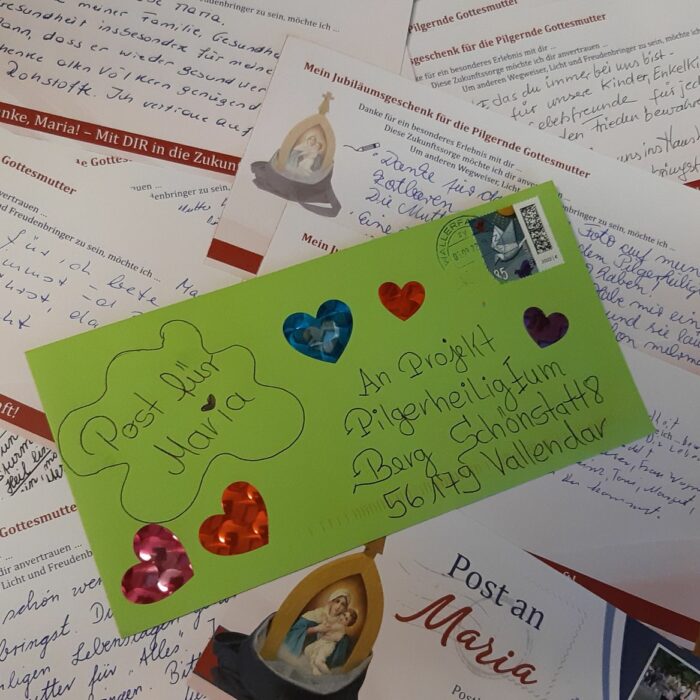 During the vigil of the celebration we asked for peace on the continent of Europe, especially now in Russia and Ukraine. The Apostolate of the Pilgrim MTA Shrine is present in both countries. The flags of both countries were brought together—symbolizing the fervent prayer that these nations come to peace. During the Holy Mass in the morning of October 1, baskets with post cards were brought to the altar: In recent months many people sent here “Mail to the Blessed Mother”—thanking for God’s closeness, requests, fears, prayers, expressed colloquially, putting into words what really moves them.

A response of significance

When the bishop crowned the auxiliary, a large Pilgrim MTA Shrine, the blue gemstone stood out in the center of the crown: blue as the color of heaven—every person is a precious and valuable gift from heaven; blue as the color of water—recalling Baptism. Blue is also the color of the planet earth “which is endangered by wars, terror, famine, and environmental disasters.” Blue is the background color of the European flag: Time and again the Blessed Mother has intervened in the history of Europe, saving the day. Thus the crowning of the Mother of God unites natural and religious aspects out of the conviction that the Blessed Mother is effective in our lives. She tells us: Don’t be afraid. I am here. 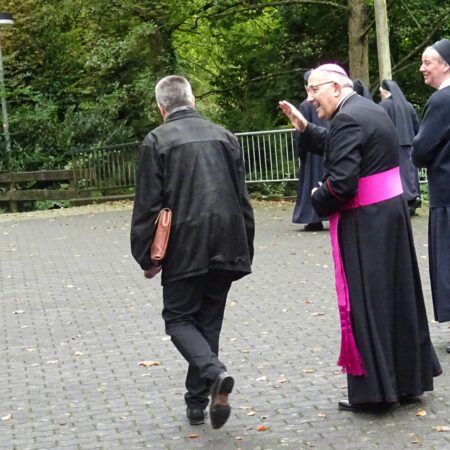 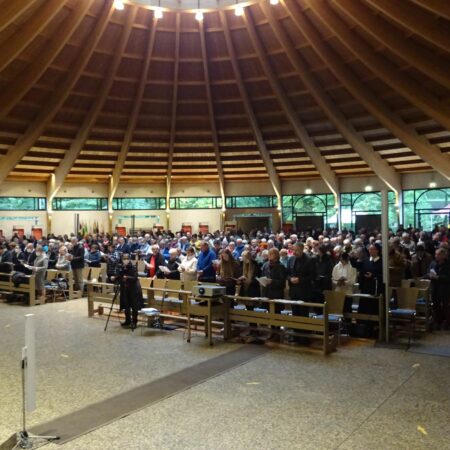 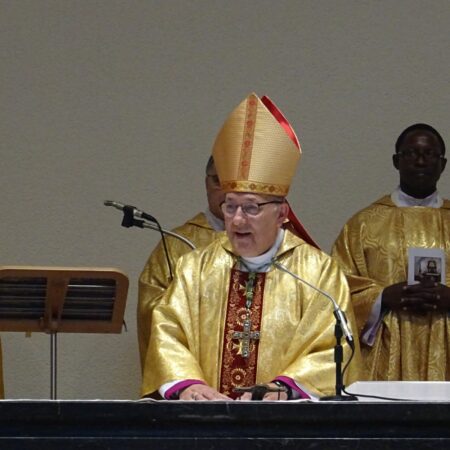 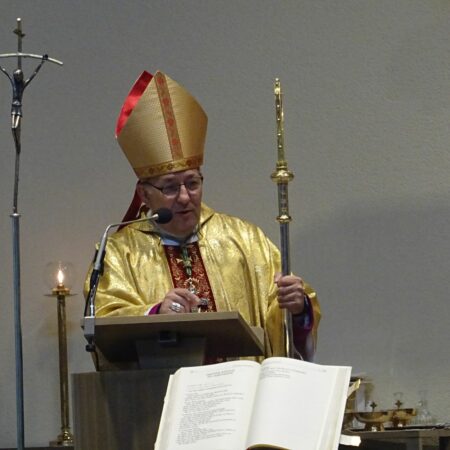 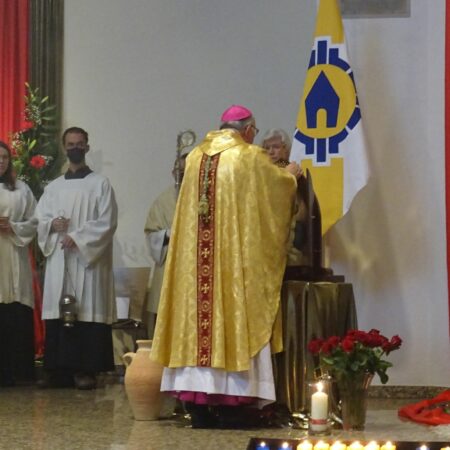 My Life as God’s Abode

“A visit of a Pilgrim MTA Shrine in a home sets God present.” These words of the bishop were manifested in many ways during the hour of testimonies in the afternoon. A young woman told what her Postal Pilgrim Shrine means to her:

“There is always much going on; things are hectic in everyday life … but when the Postal Pilgrim MTA Shrine comes, it is like a break at the gym.” And another person, “Because the Blessed Mother arrives almost monthly to each of us and is accompanied by a little booklet in which we write our personal intentions and prayers, a close, trusting relationship to one another has been formed.”

A family of four shared what the Pilgrim MTA Shrine means to them. “She always comes at just the right time and helps; this has been my experience my entire life,” is how the mother of the family summed things up. After a difficult childhood and time of youth, through the Blessed Mother the father found inner healing and faith that sustains him. When she made her first Communion, the nine-year-old daughter, of her own initiative, won some of her peers for a [Pilgrim MTA Shrine] circle and is happy about it. The 14-year-old son told of a custom that has grown in the family and is meaningful to them: the Rosary of lights on Candlemas.

The testimonies made it clear: The Blessed Mother brings God to a world where he is needed. Some of those who were present had closed themselves to the faith or had never been involved in the first place. Through the encounter with the Mother of God they experience a Church that is near the people. That has been convincing for them. 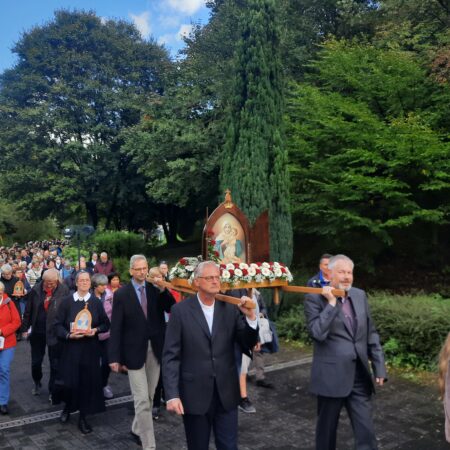 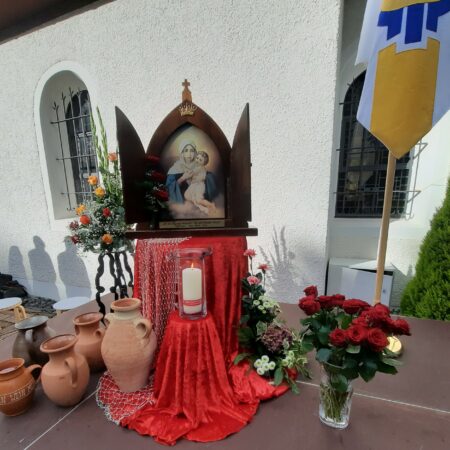 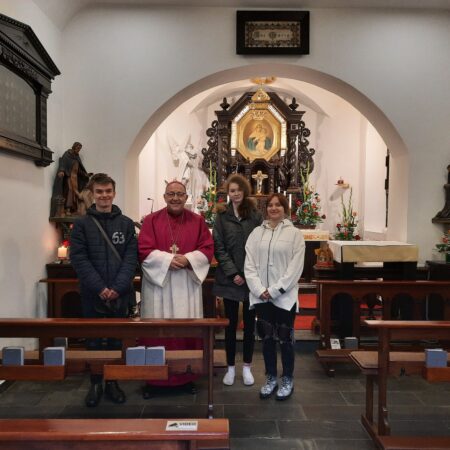 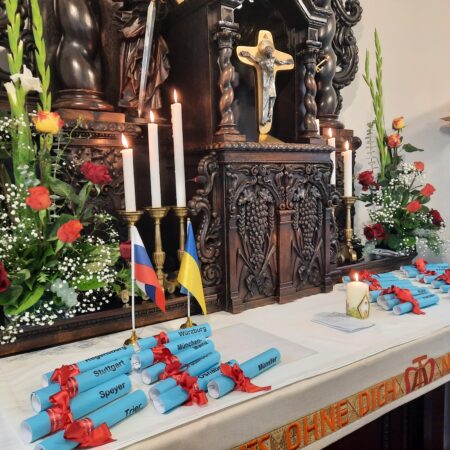 Consecrating Germany to HER

The high point was in the Original Shrine at the conclusion of the celebration: Representing many, those present consecrated Germany to the Blessed Mother. Since the beginning of the jubilee year 27 weeks ago, intensive prayer for a new beginning in faith, hope and love took place in a “prayer marathon” for the 27 dioceses of the Church in Germany, each week for the people in one diocese. During our anniversary celebration 27 scrolls on which are listed all the places where a Pilgrim MTA Shrine travels were brought to the shrine. Finally, then, there was the renewed sending out of all the Pilgrim MTA Shrines—with three new ones being sent to the Diocese of Goerlitz.

What the bishop said about the Apostolate of the Pilgrim MTA Shrine was experiential in this celebration: It is “more than a project”– it is a missionary journey of faith that Schoenstatt has initiated and that has brought many people into contact with the Mother of God and her Son.” 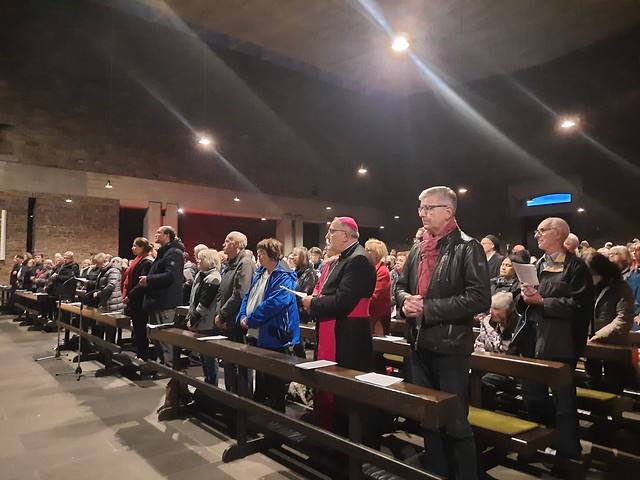