Let my Life be a Great Magnificat! 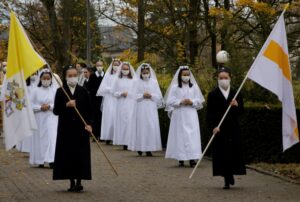 “From the moment I surrendered all of my insecurities and took the first step toward answering God’s call, it was if I lacked nothing anymore. Everything which previously troubled me now brought me inner peace and great inner joy… because I was doing God’s will.” This is how Thálita from Brazil described her experience on the path that led to her decision to join the community of the Schoenstatt Sisters of Mary.

She is one of eight novices from six different countries—Australia, Brazil, Chile, Germany, Austria, and Vietnam—who received the dress of the Schoenstatt Sisters of Mary on the Feast of Christ the King in the Adoration Church on Mount Schoenstatt.

With Joy Near and Far

On the days prior to the investiture, relatives and aquaintances traveled here. Among them were youth groups from various countries such as Brazil, Chile, Spain, and Portugal… All of them used the opportunity to learn about the place of grace of Schoenstatt and to be inspired for the feast day with a rich program. For others, because of great distance or the pandemic, in-person participation was not possible. Thus more people than usual took the opportunity to watch via Schoenstatt TV. In this way many people experienced the day of investiture as an especially international celebration.

A Family-like Preparation for the Feast Day

It has become a beautiful custom for the German Schoenstatt young women’s branch and young men’s branch to prepare a program the evening before the investiture for the families of the novices and for all of the novices’ guests. The youth from various countries participated with music pieces. The motto that the novices chose for their investiture, “Let my life be a great Magnificat!”, was the theme for this vigil celebration.

The highpoint of the evening was video clips in which the novices answered questions that friends and reatives bring with them during these days. “Against the backround of our time, how does someone choose such a path?” – “What were the reactions to your decision to become a Sister of Mary?” – “What was the hardest thing for you to renounce, and what has been the most beautiful thing on this path?” – “What do you wish for your guests?” 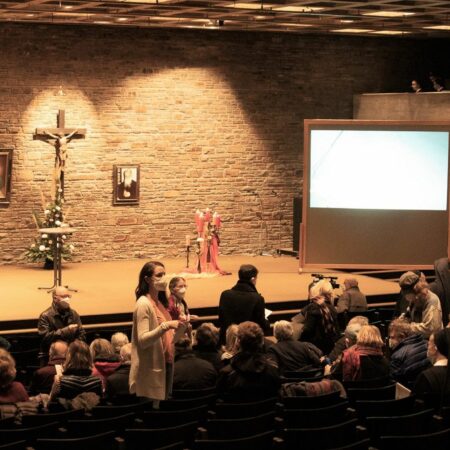 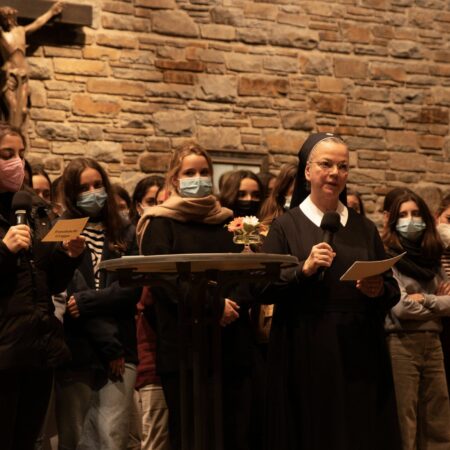 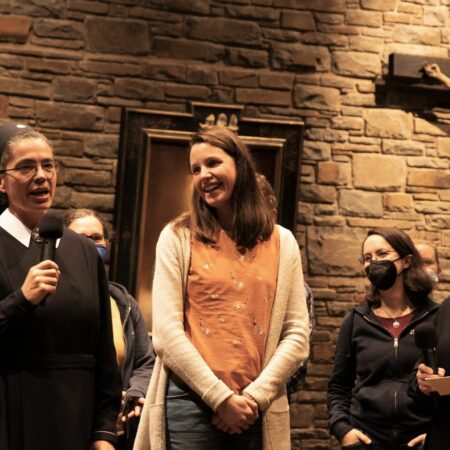 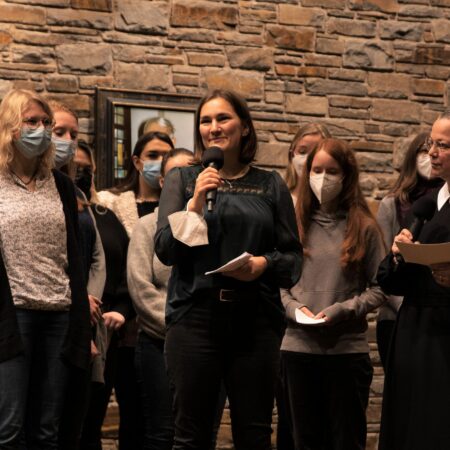 The contributions united everyone, heightened expections, and increased anticipation for the feast day. The family-like evening ended with a common prayer and the priestly blessing.

Anyone who walked across Mount Schoenstatt the next morning, on the Feast of Christ the King, could sense that something special was about to happen. Large and small Church banners, bridal-white bouquets, and above all else, joyful expectant faces indicated this. At 11:30 AM, the longed for moment arrived: The novices in white bridal dresses processed into the Adoration Church to the sound of festive bells. This experience was also very moving for the many who were watching via Schoenstatt TV. One participant from Brazil wrote on Chat: “I feel like I am in heaven.”

Father Bernd Biberger, General Director of the Schoenstatt Sisters of Mary, welcomed all of the guests, among them pastors of the parishes of which the novices were members, vocation directors of the novices, as well as priests from the priest communities of Schoenstatt. With festive songs in various languages that corresponded to the occasion and the motto of the day, the choir of the Schoenstatt Sisters of Mary prepared the liturgy for the holy Mass.

Let my Life be a Great Magnificat!

In his homily, Father Biberger, the main presider of the celebration, interpreted the motto of the novices. He depicted the Magnificat as the Blessed Virgin Mary’s song of praise in four ways: The Blessed Virgin Mary praises God’s wonders in her own life, his wonders in the lives of others who are in distress and great need of help, his wonders upon her nation, and his wonders in the entire world. “Let my life be a great Magnificat!” The novices do not only want to sing the Magnificat of the Mother of God, but they want to testify to the Magnificat of the Blessed Mother through their lives. Just as the life of the Blessed Virgin Mary is a testimony to how God works wonders, so should their lives also be a testimony to God’s saving deeds. The outward expression of this is the sisters’ dress that they will be receiving later. But the novices also want to give their motto to all who participate in this celebration, because: “If our life is a great Magnificat, then we become witnesses to God’s love which is not far from us, but is close to everyone who turns to him.”

Called by a New Name

From the moment the novices receive the dress of a Schoenstatt Sister of Mary, they bear a new name which they themselves select. Sister M. Aleja Slaughter, General Superior of the Schoenstatt Sisters of Mary, gave thanks for the new sisters and read their names aloud. 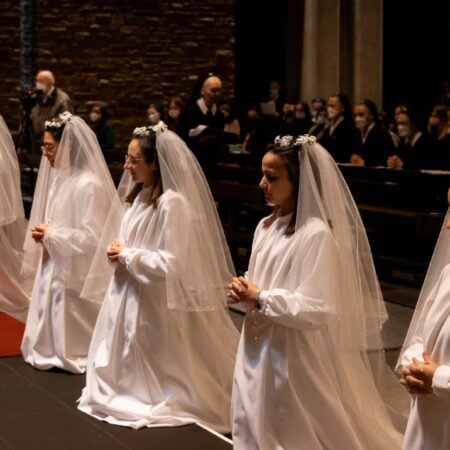 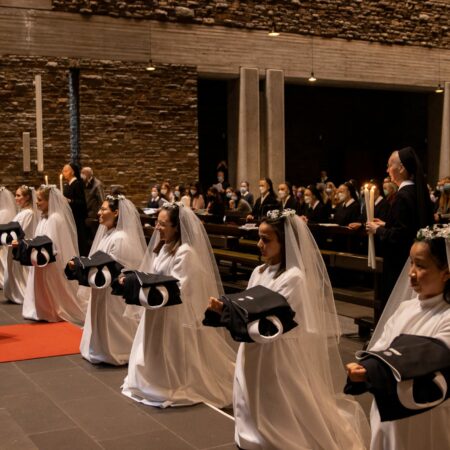 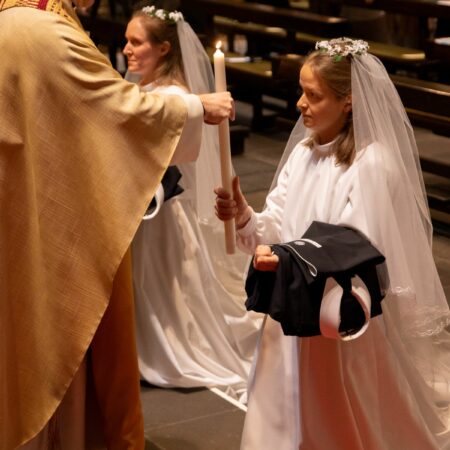 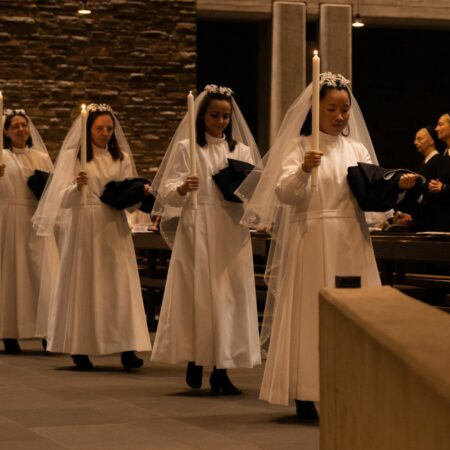 With the Litany of Loretto, we turned to the Blessed Virgin Mary. Then the novices asked for the dress of the Schoenstatt Sisters of Mary. Father Biberger presented to each one individually the dress of a Sister of Mary, a sign of her election and Marian mission, the belt as a sign of purity and faithfulness to Christ, the veil as the expression of her virginal love for and surrender to Christ, the medal as a sign of her union with Jesus and Mary, as well as a burning candle which symbolizes Christ our Light. Then the novices left the church. Songs and meditations helped the worshipers to relive the event and deepen the symbolism of the ceremony.

Finally, the longed-for moment arrived: While the Magnificat resounded, the novices processed into the church in the dress of a Schoenstatt Sister of Mary—radiating happiness! Joy broke forth from the guests for the festivity with mighty, spontaneous applause!

Then with the Creed we confessed our faith in the Blessed Trinity. The novices read the prayers of the faithful in their native languages.

At the conclusion of the impressive festive holy Mass, the novices renewed their covenant of love with the Blessed Mother in front of her picture and greeted her with a Marian hymn. 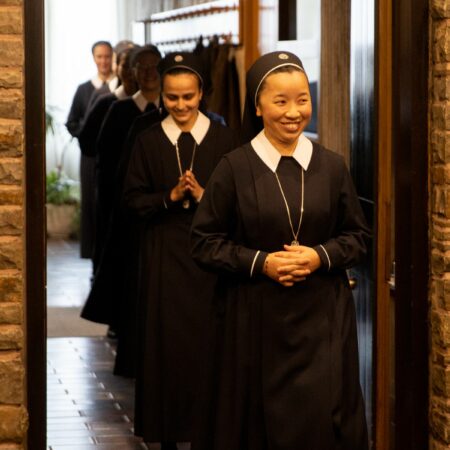 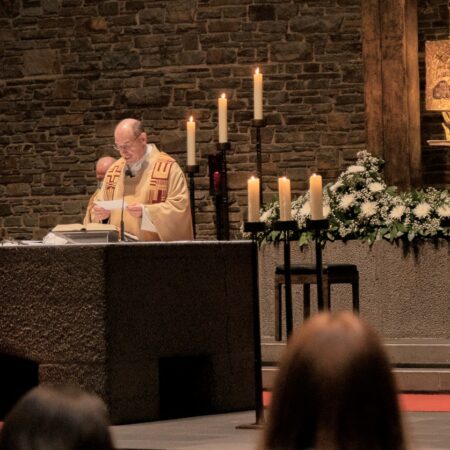 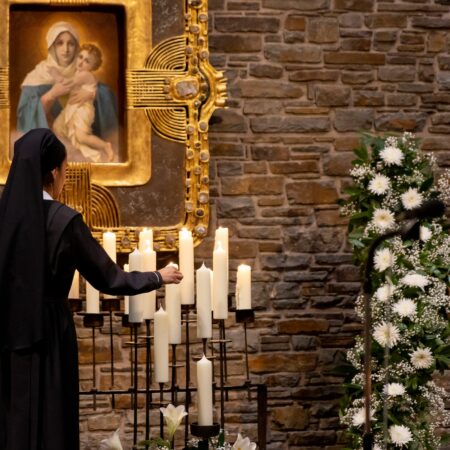 Afterwards there was a special surprise – also for the novices: Father Biberger shared that the novices had written a letter to the Holy Father asking him to pray for them. Through Msgr. Cona, Secretary of State, Pope Francis had answered their letter and imparted his apostolic blessing on the novices and their families, co-sisters, and aquaintances.

After the final blessing, the “Magnificat” was intoned again – and then began the family-like and joyful celebration of the novices in the circle of their relatives and feast day guests.

From around the World Joyfulness and Promises of Prayer

That the congratulations came from all over the world for such an international novitiate course is not surprising. It renewed the awareness that it is a grace and there is great richness in belonging to an international community. Some echoes follow here:

“May the Mother of God bless these new sisters and care for them as she cared for her Son Jesus! Heartfelt congratulations on your decision for this beautiful vocation!”

“We thank God for the gift of each novice’s vocation!”

“I am very happy about the novices. All of us who belong to the Schoenstatt youth branches rejoice over these vocations!”

“May there be many more vocations—also from my family. I am very happy about this wonderful day.”

“How proud I am that my niece is now a sister!”

“Heaven is rejoicing over the new Sisters of Mary, over their yes to Jesus and to their striving to set the Blessed Virgin Mary present in this world. The world needs authentic witnesses to consecrated life!” 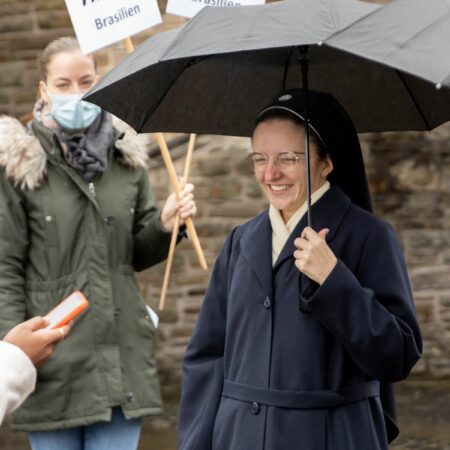 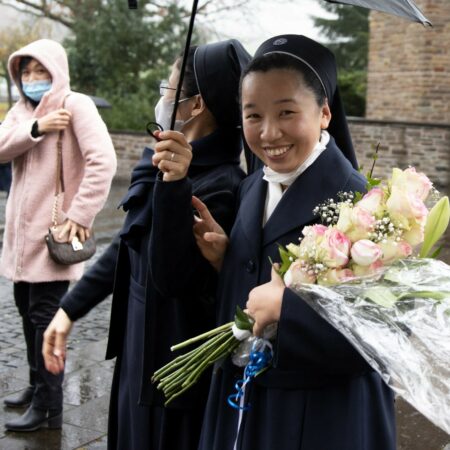 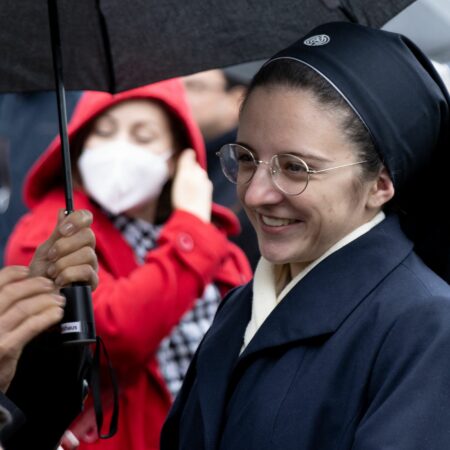