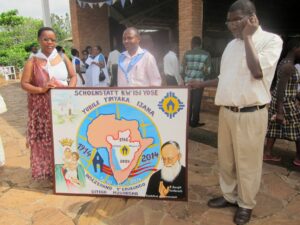 Establishing the Schoenstatt Movement in a new diocese

One day she wanted to travel to Ruyigi to give a workshop there, but she did not have the money for the trip. Shortly before the planned visit, her husband invited her for an evening in a restaurant. She replied to her husband that she would like to forgo the evening at a restaurant if he would give her the money to go to Ruyigi to train the mothers. He agreed to pay for his wife’s trip to Ruyigi and said they could still visit the restaurant together. He understood and supported her in her efforts to build up the Schoenstatt Movement. Once he even accompanied her to Mutumba.

On May 9, 2021, she traveled with her husband and three daughters from Bujumburu to Gitega. On the way their car was stopped and they were attacked by criminals. Her husband and her oldest daughter were killed. Hélène and her two other children were wounded. The perpetrators burned the automobile and the two bodies. The wounded were brought to a hospital near the site where the attack took place. Hélène was a strong woman in this time of great physical and psychological pain. She hid her suffering and continued to care for her injured children. She comforted those who cried for her. Even on the phone, she expressed her gratitude.

On the day of the funeral, May 18, 2021, before the filled cathedral in Gitega, she read the readings during Holy Mass with a strong, clear, and convincing voice that revealed to us her faith, her charity, and her love of neighbor. During the prayers of the faithful she expressed her gratitude for God’s love in the life of her family. She prayed for forgiveness for the evil-doers

Similar to Mary, Mother of God

She offered her deceased husband and her child to God through the hands of the Three Times Admirable Mother of Schoenstatt as her contribution to the capital of grace. It was, after all, the eighteenth of the month, the covenant day when Schoenstatt members bring their Schoenstatt banners and wear their Schoenstatt scarves. She courageously participated in all the funeral rituals. Before covering the graves of her husband and oldest daughter, she sang the Schoenstatt Hymn as her beloved farewell song.

In her words of gratitude for the support she received, she said she was strengthened by the image of the Virgin Mary under the cross.  Yes, she was trying to be like Mary. The people present were surprised at her courage. After that she asked for prayers for all those who had died with her husband and child in that ambush. She also prayed for the criminals that they would find their joy again. And she prayed for the surgeries that were in store for her and her children in the following days.

The Pre-founding Document states: Under the protection of Mary we want to educate ourselves to be free people with a firm, free and priestly character; yes, in the life of Hélène, we have experienced:

The Covenant of Love Gives us Strength.