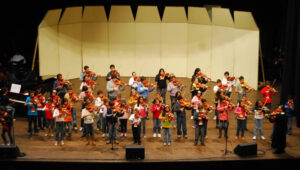 We know that music has a calming influence on our lives. It helps us to think and pray and to be interiorly uplifted. What not everyone knows, however, is that Schoenstatt made a significant contribution to music in Brazil. 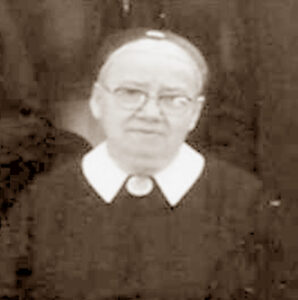 Among the 12 German missionary sisters who were sent to Brazil by the founder, Father Joseph Kentenich in 1935 was Sister Mariaregis Kessler with the violin that was inseparable from her. For her, being Mary meant broadcasting the original mission of the Blessed Mother, which God had entrusted to her in Schoenstatt, and allowing the song, intoned by Mary in the Magnificat, to continue. In the weeks of the arduous voyage with the ship “Sankt Martin”, melodies and songs were often played on deck and the crew gathered around the picture of the MTA to accompany the songs, or simply to listen to the choir of the Sisters of Mary, some priests and seminarians. On land, the beat of the music set the rhythm for the rapid beginning and growth of the Schoenstatt family in Brazil, but it went even further. On November 13, 1945, the music school in the college “Mãe de Deus” was established, which over the course of 75 years has made a notable contribution to Brazilian music and abroad. Sister M. Sandra Regina Netto, who ran the music school as coordinator for 25 years, tells us about it.

What is this music school?

It is a reference to the music in Brazil. In the years that I worked as a coordinator in the music school, I was able to immerse myself in the wonderful universe of music. Our music school, which was also a music academy for many years (“Faculdade de música Mãe de Deus“ FMD), was the basis for the establishment of the music course at the State University in Londrina and contributed significantly to the implementation of the International Festival (FIML) in Londrina. Many of our students became musicians or supplemented their music education at our music college in courses for choir, instruments, music pedagogy, ethnomusicology (the study of music in its cultural context) and others.

Through music, many found their way to the shrine, where they experienced the presence of Our Lady.

I would like to add an example: The eminent pianist and professor Homero de Magalhães (Link)  once asked me: “Sister, please tell me what is special about this place? Here I am experiencing something that I have never experienced in my entire life … and you know, I have traveled the world!” I then invited him to get to know the shrine. When he came out of the shrine he had tears in his eyes and said to me, “Sister, what a negligent Catholic I am! How much I remembered my mother and everything she taught me!”

This was certainly a deep encounter between God and Mary, which prepared him for the final encounter with God in the following year.

Another example from one of the best mandolinists in Brazil (Link) Joel Nascimento. He was so impressed by the atmosphere of the shrine that he composed a melody called Divine Presence. 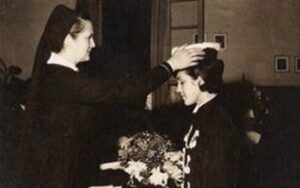 The Suzuki method (Link), which brought many benefits in the field of music, came to Brazil through Sister M. Wilfried Gassenmayer. She was in correspondence with Waltraud Suzuki (wife of Shinichi Suzuki) and traveled as far as Japan, where she had lessons from Mr. Suzuki himself, and brought his method to our homeland. Shinobu Saito, current reference in the Suzuki method, was motivated by Sister M. Wilfried. She tells the story in this link (Link)

“The ‘Mãe de Deus’ college was the symbol of music in Londrina, where everything of the best and most valuable happened. (…) I was very happy and I think that the music that I carry within me was created there with you.” Luciana Gastaldi, pianist

“One of the main axes of my ethical, musical, religious and civic education was laid by the education in the college and in the music academy ‘Mãe de Deus’ and by the Schoenstatt Sisters of Mary. For three decades I was able to pass on everything I had learned in the field of musical education in Brazil and in an international context. I am grateful and happy to have received these precious teachings from the Sisters of Mary as a basis for my life.” Magali Kleber, Member of the Executive Council of the International Society for Music Education

“It is hard to believe that 25 years have passed since our lessons in the ‘Mãe de Deus’ music school. There are many who don’t remember anything from their 4th and 5th year of life. But I have many and the best memories of that time. I remember very well the interest you aroused in me in using the 4th finger instead of the loose string and how “special” the sound was when that 4th finger fell in the right place. I remember the immeasurable patience – very necessary to ‘endure’ the rascals of such young students of an instrument that requires so much attention and commitment to learn to play it.” Matheus Garcia Souza / Violin Performance (Link). 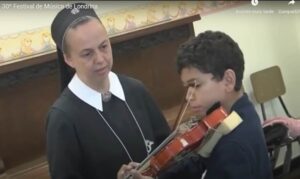 “It was in the ‘Mãe de Deus’ college with my dear and first teacher, Sister M. Sandra Regina, where I discovered my love for music! She taught me to play the violin and guitar and really love what is my job today. The music that has accompanied me for 21 years gave me joy in every moment of my life and helps me to pass this on to others.” Thais Souza violinist in the
“ Orquestra Jazz Sinfônica Brasil ”

“Our family was shaped by music. Since my marriage to Marcello, the birth of our children Mariana, Gabriela and João Gabriel, we have always had music as a sound and vital rhythm in our house. Through my work as a piano teacher in the ‘Mãe de Deus’ college, it was possible to introduce my children to music at an early age, each with their own instrument, which helped to shape their personality and character. At the same time as they were studying in college, I was working there and this entire musical atmosphere shaped our lives and motivated our family to seek more and more the beauty, the tenderness and the charm that music brings.”  Gislaine Mafra – piano teacher and member of the Schoenstatt Family Institute.