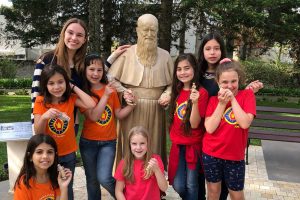 “Here I am, Father, my hand in your hand!” Under this motto, the Schoenstatt Girls’ Youth (JUFEM) in Brazil celebrated the 50th anniversary of the return of our founder, Father Joseph Kentenich, to eternity. United with the founder, the young women aspire to holiness. Heloisa Benato from Curitiba, Paraná, explains that the JUFEM wanted to get to know the founder even more deeply. In this year, which was especially dedicated to him, they tried to express their yes in everyday life, knowing that they were instruments. The young woman confirms that she herself was able to experience a father who leads, educates and never gives up on us.

RADIATING LIGHT FOR THE WORLD

“Father, we are your apostles in action,” was the motto guiding the activities of our little Marian Light Apostles. Motivated by the Kentenich Marathon, the girls could easily get to know the founder’s life from his childhood on through their material. We studied the life of our father in different situations, and in a concrete way the apostles were able to live some of the virtues of the founder in everyday life.

A DEEP BINDING TO THE FOUNDER

This year’s studies and experiences have given the JUFEM and the Marian Apostles a deeper relationship with the Founder. Many young women decided to confirm their attachment to Father Kentenich. Aline Silva from Guarapuava, Paraná, testified that this year she was especially connected to Father Kentenich and something new was awakening in her heart: the question of her vocation. And in the midst of these questions, the young woman discovered little signs of love and considered them as a request of the Father. “Since then I pray and have given myself and my vocation to the fatherly care of our founder, knowing that I will go with him on the path that leads me into the heart of the Eternal Father.” May her yes be a gift to Father Kentenich. 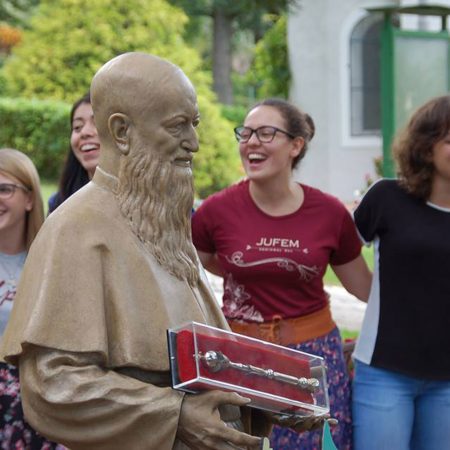 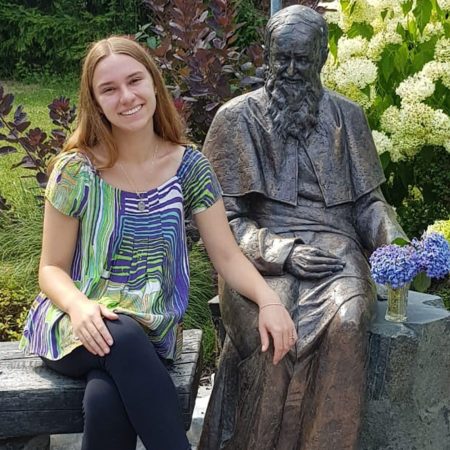 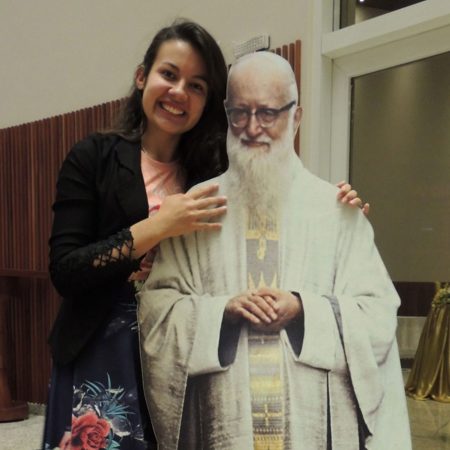 YOUTH ON THE MOVE

In response to the call of the Catholic Church to live a culture of encounter, the Schoenstatt Youth of Brazil has been conducting missions throughout the year. The Youth Mission “Tabor” and the University Students’ Missions united about 200 young people to be Church on the Move. With the Pilgrim Mother, the missionaries proclaimed the gospel and brought the graces of the Blessed Mother from the shrine.

In October, during the Youth Synod, Pope Francis reiterated his invitation. Under the motto “Young people, faith and vocation”, the Pope entrusted the mission to young people to be builders of a new church on the move.

Towards the end of the year, our JUFEM is now living in anticipation of World Youth Day in Panama in January. The motto is: “Behold, I am the handmaid of the Lord: let it be done to me as you have said” (Lk 1, 38). 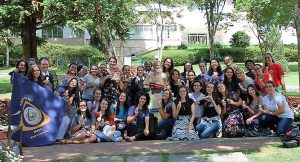 With a great deal of propaganda and many sacrifices to raise the necessary money, the young women are about to realize their dream. The last and biggest action will take place on December 16 in Jacarezinho, Paraná, with a charity run.

This will enable thirty young women from Brazil, together with the responsible sisters, Sr. Eliza Maria Silva and Sr. M. Lidiane Francisconi, to represent the girls’ youth at the WYD and in Hinéni, the MJF’s international meeting in Costa Rica, All this awakens a lot of strength and joy in the youth to live their country ideal: “Lilies of the Father, Tabor for the world”.